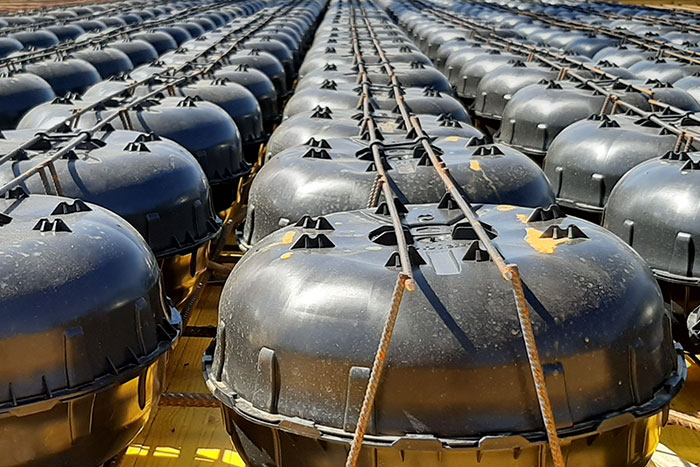 The new building's inner city location and the various uses for the ground and basement levels, compared to the uniformly designed upper floors, presented a challenge for the architect and structural engineer. The proximity of adjacent buildings, whose foundations could not be disturbed during the civil engineering work, also had to be taken into account.

In order to achieve gmp architects' ideas, the structural design experts at WTM Engineers Hamburg suggested using Cobiax SL modules, since using void formers compared to reinforced concrete allows weight to be reduced by up to 35 percent. "Our planning office had already met with positive experiences using Cobiax products in other projects, and so they came up with a perfect solution for this challenging project," recall Detlev Haasse and Christopher Gabbert, Project Managers at WTM Engineers.

The patented Cobiax system, consisting of 250 cm long reinforced steel modules, where void formers are installed once the half-parts have been put together, replaces up to 35 percent of concrete in areas where no concrete is required for the (bending) load-bearing ability of the slab. "Significant savings in materials and weight can be achieved through using our technology," explains Dipl.-Ing. Volkmar Wanninger, Managing Director of Heinze Cobiax Deutschland GmbH. "The positive impact on the building's structural design provides the architects with previously unthinkable opportunities for designing further spaces: on the one hand through shallower slab depths, and on the other through spanning up to 20 m."

These advantages could be exploited to the full in the SPRINGER QUARTIER, as various areas of the building could not have direct foundations, complicated foundation issues arose at the property boundaries and the varied uses on some floors made it necessary to use different retaining wall designs. "Weight savings achieved by using our void former systems made many of the retaining walls viable in the first place, as well as constructing some parts of the building overhanging by up to 8 m," explain Gabbert and Müller with one voice.

Any values needed for planning the use of void former systems were calculated for the demanding architectural geometry in the SPRINGER QUARTIER using "Quick and Light" software, which Cobiax provides to all structural engineers free of charge. These structural design specifications were subsequently incorporated into the structural and reinforcement plans by the Ed. Züblin AG Hamburg Technical Office, and so could be implemented on the construction site.

A particular challenge for large-scale construction sites in inner-city locations was the limited space available and the requirement to minimise the impact on normal city traffic. "Due to the SPRINGER QUARTIER's central location, the time slots when materials could be delivered to the construction site were very tight. What's more, there was only limited space available on site for unloading delivery vehicles, " reports Christoph Wieghaus, site manager for Ed. Züblin AG. Ed. Züblin AG is part of the STRABAG SE group of companies, one of Europe's leading construction services technology groups.

Since a total of 5,500 tonnes of steel and about 34,000 m³ of concrete were needed for shell construction, all deliveries had to be precisely coordinated to avoid traffic jams in the surrounding streets. Delivering the Cobiax SL void former modules to the construction site over a total of seven loads was also included in the time planning. We pre-assembled the void former systems for the first delivery at the HEINZE Cobiax Deutschland factory, so the concreting work could start straight away. For the remaining six, the individual components were assembled and processed on site instead.

"After finishing the first mid-layer slabs, those areas could be used as temporary storage and assembly space for the Cobiax modules," explained Wieghaus. "After pre-assembling the void former modules, we then put them into position on the individual slab sections." On the first day using the void former modules, the Cobiax Team gave training to all workers on site to ensure quick and easy assembly. For the laying itself, plans were drawn up where the slab surfaces were covered in void formers. These were drawn up by the Cobiax experts, taking into account the structural engineering design calculations, in order to avoid any structural problems with the slabs. Once the modules had been put into position as specified in the plans, the concreting was done in two stages.

"The pre-concreting for putting the void former system into position, to prevent them bouncing around, was done using the concrete pouring bucket. Pouring the concrete and assembly work was suspended in order to concrete in the Cobiax void formers on the surfaces, and presented a further challenge in terms of the limited space," explains Wieghaus. "This means the spacers, which also function as structural parts, create the bond. Subsequently, in a second step, the slab is concreted over."

Among other things, this results from eliminating 80 concrete mixer journeys to the construction site. "Within the next 5 years, we want to reduce CO2 emissions by a total of 1 million tonnes, through using our products in reinforced concrete construction, in order to progress the rethink towards sustainable construction", concludes Wanninger. As more than 14 million square metres of Cobiax voided flat slabs have already been produced, corresponding to 2 million tonnes of concrete saved and a CO2 reduction of 180,000 tonnes, this objective seems quite realistic.