Another Award-Winner: Verti-kal and the John Fry Sports Park Pavilion

The influence of Kalwall® on the award-winning John Fry Sports Park Pavilion in Edmonton, Alberta is obvious and immediate.

Verti-kal panels encase the building, allowing it to glow softly at night and bathe the locker rooms in diffuse natural daylight during the day. 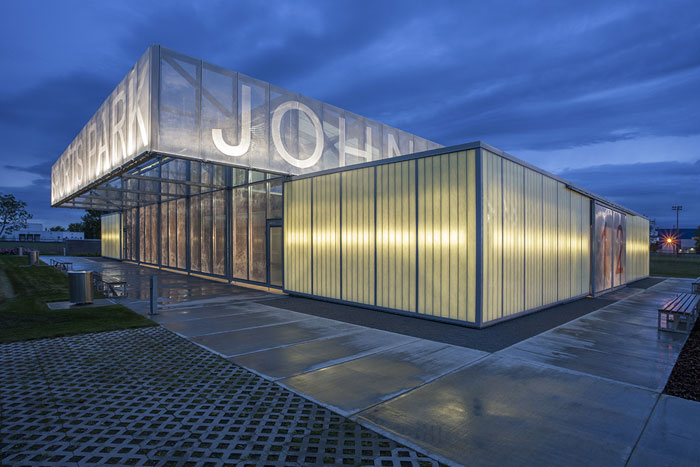 The pavilion, which houses six locker rooms and a concession stand, has been described as a lantern for the players using the multiple baseball and softball fields of this sprawling complex in the southeastern corner of Edmonton. It is a distinct feature of the park and is visible from all six of the park’s playing fields.

Designed by the marc boutin architectural collaborative inc., the John Fry Sports Park Pavilion was named a 2015 Urban Design Award Winner in Urban Architecture by the city of Edmonton.

“We chose to use Kalwall for a number of reasons. First and foremost, we saw the diffuse light qualities that were possible in using Kalwall,” says Tony Leong, M.Arch, lead architect on the project. “The nature of the program required the spaces to be well lit, but in terms of budget, performance and durability, curtain wall was not an option. The Kalwall product combined the clean aesthetic we were looking for with the performance and durability that was required.”

The aesthetics of the Verti-kal pattern works nicely with the industrial theme of the building that reflects the park’s neighborhood.