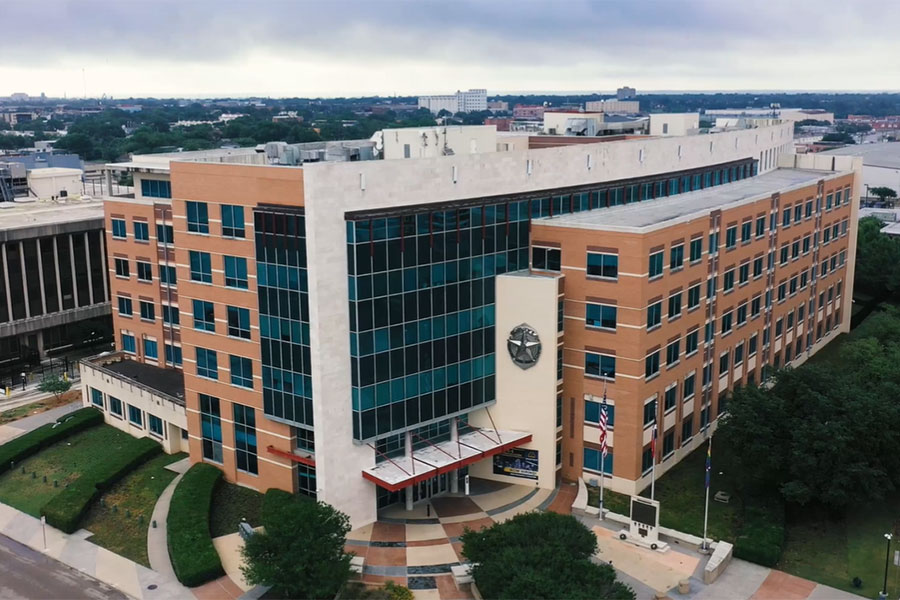 There is a saying that “Everything is Bigger in Texas,” and the Dallas police department fits the bill. The Dallas Police Department is the ninth largest municipal police force in the U.S., with 3,099 sworn officers and 598 non-sworn staff. It is led by Chief of Police Edgardo (“Eddie”) Garcia.

In the last several years, the Jack Evans Police Headquarters building (named after the 53rd mayor of Dallas) has been upgrading its physical security using a layered approach to ensure the safety of officers and visitors 24/7. The most recent addition is a brand-new fence line fortified with vehicle gates and Boon Edam Turnlock full height turnstiles to control pedestrian access into secured parking areas.

The Jack Evans Police Headquarters building was built in 2003. The six-floor facility has 358,000 square feet, and is spread over a three-acre site, with a separate 1,200 car parking garage and a two-acre, open parking lot for additional police and visitor parking.

The Headquarters building was under construction when 9/11 terrorists flew airplanes into the World Trade Buildings in New York. Therefore, security was a concern in its original design. Police officials worked with a Police Design Consultant – McClaren, Wilson, and Lawrie Architects of Phoenix, AZ – to help design the building to resist a terrorist attack and isolate potential hazards. The building also needed to control visitor traffic and access. In an average month, there are 5,000 public visitors to the Jack Evans building.

An Active Shooter Incident Led to an Increase in Security

After midnight on June 13, 2015, a 35-year-old male placed a duffle bag with a remote-controlled bomb to detonate later between cars in the parking lot of the headquarters building. The suspect then began shooting continuously at the lobby windows with a rifle. Officers responded to the scene, a vehicle chase began, and the incident ended outside the city. Fortunately, officers in the lobby took cover and were not injured.

Following that incident, the Dallas Police Department conducted a security assessment of the building, and also at seven patrol stations throughout the city. The assessment included testing various construction materials for bullet resistance to various types of weapons. Gensler Architects and Guidepost Solutions, LLC developed the solutions and plans. Paul M. Schuster, Senior Corporal/Facilities Management, was responsible for managing implementation of the security upgrades.

“The police tend to be a symbol of government and some citizens see that as a visible target to lash out at,” says Schuster. Police officers are trained to expect the routine types of calls, such as domestic violence, traffic accidents, and other crimes. Yet they must be flexible to anticipate the non-routine that can be dangerous and change in a heartbeat. Yesterday we were concerned about handguns, today we are worried about rifles, and the idea of terrorism is always present with outright attack or bombs. The police officers and staff only want a place that is safe and where they can do their good work.”

In 2016, funding of $1.3 million was approved to upgrade the lobbies of the seven patrol stations to withstand rifle rounds, and $1.9 million to improve headquarters lobby security, and to upgrade an aging security system. Turner Construction Company and Convergint Technologies, LLC conducted the renovations and security technology integration.

The headquarters’ lobby was initially built as a two-story glass-walled structure, with an information desk and public records service windows. Visitors could freely enter the lobby and were only screened in an open area to the side if going to the upper floors.

“The challenge in upgrading lobby security was the two-story lobby entrance glass. The glass was not bullet rated, due to budget constraints. Changing the front of the building to support ballistic rifle-rated glass would have caused extensive time, exposed the inside of the lobby to weather, and would not have solved all of the security issues. In addition, there were concerns about keeping an ‘open’ and friendly service concept in mind and ensuring that the lobby would not resemble a ‘fortress’,” Schuster said.

The solution was to retain the original, two-story glass exterior but add a layer of security inside once a person enters the lobby – a new separate security screening room. A new interior wall with bullet-rated glass and solid bullet-resistant wall materials was constructed inside the lobby to channel visitors to the room. Now, all visitors must pass through a metal detector and have their belongings x-rayed prior to entering the original lobby. The room itself also has bullet resistant walls to enable containment of any violent disruption or shooting inside.

Once a visitor has been cleared, they exit the screening room into the main lobby via a Boon Edam Tourlock 180 security revolving door which is set to allow only one-way traffic into the lobby. The Tourlock is the most advanced security revolving door in the Boon Edam product range for its ability to prevent tailgating by unauthorized users. If more than one person tries to enter a compartment, the door will reject both users and they must request permission from the guard to pass through again, one at a time.

At the end of their visit, visitors will exit the building via the lobby through a separate Boon Edam Tourlock 180 that leads into the front vestibule where they first entered the building. The Tourlock is set to allow public visitors to exit only and will reject attempts at re-entry. However, any police officer or staff can present a credential and use the door to enter the lobby with a valid credential.

In this manner, the first layer of security was completed inside the Headquarters building, while keeping the best aspects of the lobby design, including the antique police car, and the overhead police helicopter. 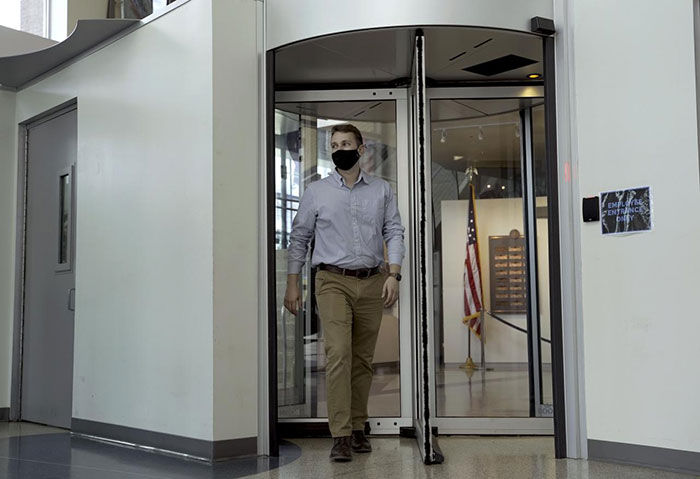 Layer 2 – Upgrading the Headquarters’ Perimeter Security with Protection and Deterrence

In 2021, the Headquarters building implemented its next, planned security layer to deter crime and violence in the outer ten acres of the property complex, which consists of the three-acre building site, a two-acre, open parking lot, a five-acre garage and an access street between those. This phase was financed by a $1.2 million bond in 2017.

Surrounding the north, south and western access points around the facility is a brand new, Impasse II heavy duty steel palisade fence by Ameristar in a black powder coat finish. The fence is comprised of individual steel pales secured vertically to a framework of specially formed rails and I-beam posts. The pales bend outward at the top to deter climb over attempts by intruders.

At the north and south entrances located on an access road behind the Headquarters building, HySecurity and Lift Master motorized gates are positioned to allow only authorized police officers and staff to access the exterior secure areas by car. Adjacent to each of these vehicle gates are Boon Edam Turnlock 100 full height turnstiles to allow pedestrian police officers to enter the parking area and walk into the headquarters building. Close by is a Public Transit Light Rail station which some officers use to and from work; and some officers choose to park their personal vehicles outside the secure area; therefore, the Turnlock 100’s provide a discrete, pedestrian entry option that safeguard users who otherwise might walk through the vehicle gates and risk injury or allow unauthorized vehicles to enter.

The Turnlock 100 turnstiles were selected for their ability to stop tailgating and also for their rugged construction that can withstand outdoor weather conditions. Their full height structure deters climb over attempts and a black powder coat finish was selected to match the adjacent fencing perfectly.

On the west side of the property, adjacent to the quartermaster’s building, is a public parking lot for visitors. Another Impasse II fence separates this parking lot from a staff-only, side entrance into the Jack Evans headquarters building. The fence forces all public visitors to walk on the sidewalk to the front of the building to enter via the main entrance and screening room. However, any police officers that are walking across the lot from the quartermaster’s building can use their badge to access the staff-only, side entrance to the Headquarters building by entering through a third, Boon Edam Turnlock 100 turnstile. 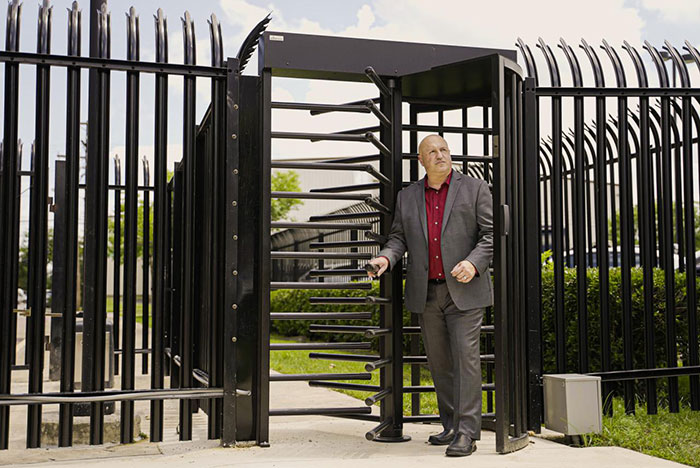 The exterior fencing around police fleet parking and the Headquarters building improves the safety of officers, staff and the building itself by keeping potential threats out at a distance. Police facilities, and particularly police headquarters, are subject to incidents ranging from “random” violence on individual officers to large protests related to local or national incidents.

“While usually peaceful, we have noticed that as the groups disband or move to other protest sites, groups of individuals will test site security by pulling on exterior entrances to see if they can gain access and potentially be disruptive to operations,” stated Schuster. “A concern is if one person can open the entry, others will follow and outnumber responding officers. The one-at-a-time access granted by the Turnlock 100 turnstile allows police to better control and separate individuals that might be disruptive or who might follow officers accessing the secure area.”

Police facilities are usually designed to provide enclosed areas to move arrested persons from vehicles to holding or processing-controlled environments. If these staging areas are overflowing, officers may park their vehicles in the fleet area and walk the prisoner into the building. Separation of the public from the movement of prisoners is at the core of good police facility design.

“There have also been incidents nationally, where officers are beginning their shift and walk to their patrol vehicles to secure their work gear and are attacked by pedestrians walking through open parking lots. If you think of patrol vehicles as “mobile offices”, it is easy to see that officers can become distracted as they begin their shifts and not always aware of their surroundings until they leave the property. Securing these fleet areas should be the practice everywhere,” says Schuster.

Every facility must also contend with deliveries, and medium to large facilities usually have loading docks and trash recycling. These areas are often directly adjacent to the building and are therefore a concern because of threats such as vehicle bombs or incendiary items in trash dumpsters; for the police headquarters it made sense to secure these areas from public access.

“Securing the private access road to the Jack Evans Police Headquarters has always been a desire, and now the addition of the steel fencing, the vehicle gates and Boon Edam turnstiles has created a barrier of safety that protects all of our people and assets to the very edges of our property,” states Schuster. “This new deterrence layer makes our officers and staff feel safer and it protects our fleet of vehicles and the back sides of the building from random attacks, bombings or shootings. We are very glad to have this second phase of our long-term physical security plan completed.”