Dubai Electricity and Water Authority (DEWA) has connected 1,354 photovoltaic installations on residential, commercial and industrial buildings in Dubai, with a total capacity of 125MW. This is due to its Shams Dubai initiative to encourage customers to install solar photovoltaic panels at their premises to generate electricity from solar power and export any excess to the power grid.

“DEWA supports the Dubai Clean Energy Strategy 2050, launched by His Highness Sheikh Mohammed bin Rashid Al Maktoum, Vice President and Prime Minister of the UAE and Ruler of Dubai, to generate 75% of Dubai's total power output from clean energy by 2050. Shams Dubai gives Dubai’s residents the opportunity to transform their buildings into sustainable ones, reduce the Emirate’s carbon footprint, and increase the proportion of solar power in Dubai's environmentally friendly energy mix. Through this initiative, community members will promote sustainable development in Dubai and transform the Emirate into a global hub for clean energy and green economy. This will also support the Smart Dubai initiative launched by His Highness to make Dubai the smartest and happiest city in the world,” said HE Saeed Mohammed Al Tayer, MD & CEO of DEWA. 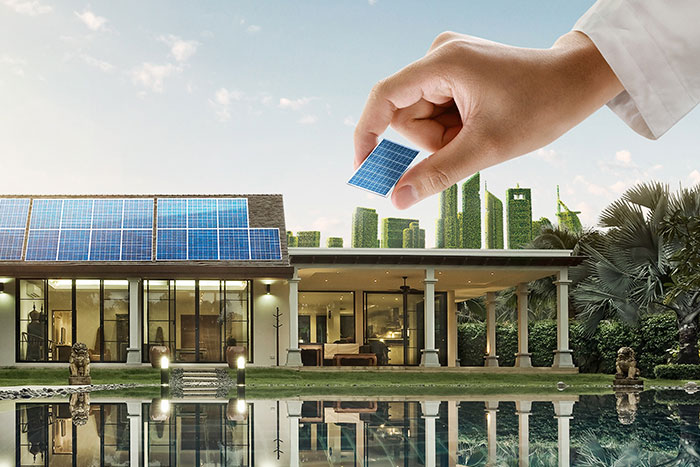 “Apart from providing those direct benefits to customers for electricity and increasing the value of buildings where solar photovoltaic systems are installed, Shams Dubai establishes a sustainable model for providing clean energy and supporting Dubai’s economy without harming the environment and natural resources. This is aligned to the long-term Green Economy for Sustainable Development initiative, launched by His Highness Sheikh Mohammed bin Rashid Al Maktoum, to build a green economy in the UAE. Moreover, Shams Dubai contributes to the UAE Vision 2021, to make the UAE one of the best countries in the world by 2021, by its sustainable environment and infrastructure objectives, through the improvement of air quality and increasing the share of clean energy, in addition to the Dubai Plan 2021 to make Dubai a smart and sustainable city,” added Al Tayer.

“The Shams Dubai initiative’s first customer to connect solar photovoltaic systems to DEWA’s grid, was the rooftop of the employees’ building at Dubai World Central - Al Maktoum International Airport, with a capacity of 30 kilowatts at peak load (kWp). After that, a number of ambitious projects were completed, including the 1 megawatt at peak load (MWp) carport installation at Emirates Engine Maintenance Centre in Warsan, a number of Dubai Municipality buildings, including the 260kWp carport at the Khawaneej park, the 1,210kWp plant at the Engineer’s Office’s water pumping station at Al Qudra, the 126kWp canopy at ENOC petrol station near Dubai Internet City, and 426 villas at the Sustainable City,” said Al Tayer.

DEWA also connected a number of distributed solar projects at its own premises, including the 1.5 MWp plant at Jebel Ali Power Station. This installation covers the roof of Jebel Ali’s M Station, which is one of the largest rooftop projects in the Middle East and North Africa. DEWA partnered with 19 government organisations in Dubai, sponsoring 37 projects under the Shams Dubai initiative. These projects include schools, mosques, and villas under the umbrella of the Mohammed bin Rashid Al Maktoum Housing Establishment.

“DEWA has outlined easy steps to install photovoltaic systems on buildings to generate solar power as part of the Shams Dubai initiative. The installation process starts with the customer contacting one of the solar consultants or contractors enrolled by DEWA to study the possibility of installing the solar power system and suggesting the best solution. The consultant or contractor then obtains the necessary approvals from DEWA. These include a No-Objection Certificate for installing solar power and connecting it to the power network, and design approval that confirms its design meets all requirements. After obtaining the necessary approvals, site works are undertaken. Once the installation is complete, the contractor or consultant submits a notification, DEWA then conducts a technical inspection of the site and install the required smart meters to complete the connection process,” noted Al Tayer.

“In addition, DEWA’s Shams Dubai Calculator was launched on DEWA’s website to support and educate customers who want to install solar panels on rooftops, by providing estimated comparisons and additional information with ease. The Shams Dubai Calculator is an innovative and learning tool provided by DEWA to customers who wish to produce electricity using photovoltaic panels under the Shams Dubai initiative. Once customers have entered their registered account numbers, they can identify the location of their building and determine its surface area through an interactive map. They can also estimate the number of solar panels needed in this area, and the capacity of these panels on a monthly or annual basis. The client can draw the space that he or she wants to benefit from, subject to the total actual surface area of the building. The interactive map allows the client to know other information as well, such as solar panel sites installed by DEWA, DEWA’s certified solar services consultants and contractors, and the possibility of sharing results through social media,” added Al Tayer.

To date, DEWA has certified 647 solar photovoltaic professionals in 19 training sessions as of July 2019, and a total of 132 companies are currently enrolled with DEWA for Shams Dubai: 119 contractors and 13 consultants. The equipment eligibility scheme has attracted interest from about 131 manufacturers who have registered so far, and more than 1,342 solar equipment including solar panels, inverters and interface protections, have been made eligible for use by Shams Dubai. DEWA has made available detailed information about Shams Dubai, including the Shams Dubai Calculator, in the smart initiatives section of DEWA’s website. It includes all the conditions and requirements for Shams Dubai, as well as lists of enrolled consultants and contractors, and eligible equipment.