Dubai's New Landmark: Museum of The Future Is Complete

His Highness Sheikh Mohammed Bin Rashid Al Maktoum, Vice-President and Prime Minister of the UAE and Ruler of Dubai, stressed today that the Museum of the Future is an Emirati architectural marvel aimed to build human capabilities better equipped to utilize the Museum in the future. His Highness, during his visit to the Museum to witness the installation of the final piece of façade, also noted that the Museum is a unique global architectural icon with an Arab identity. 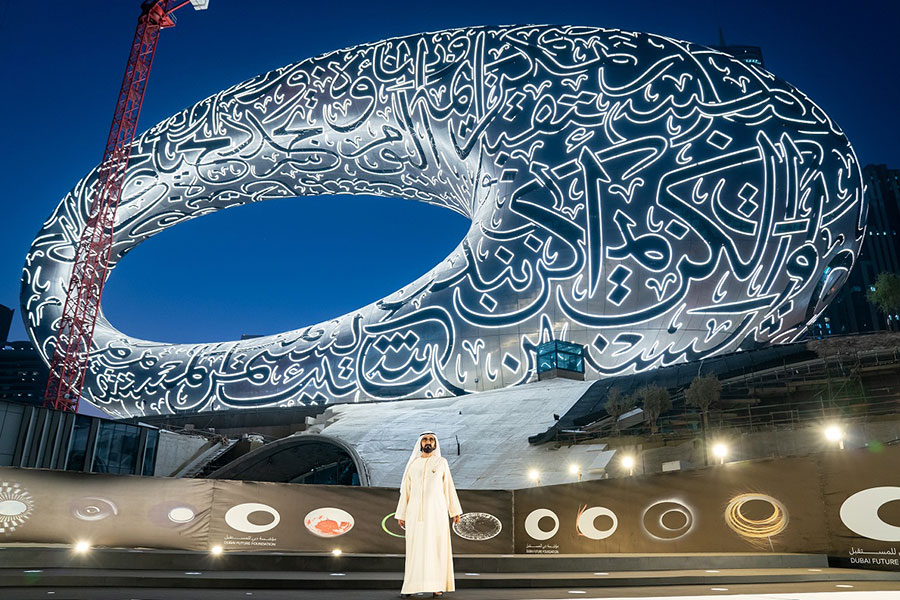 His Highness Sheikh Mohammed Bin Rashid Al Maktoum, the Vice-President and Prime Minister of the UAE and Ruler of Dubai said: " The Museum of the Future is a global architectural icon that shows that human miracles are possible. It will play an instrumental role in our efforts to shape a better future. We are not merely seeking to create architectural wonders, our main focus is on unleashing the highest human potential and creating a better tomorrow. The building is a testament to the remarkable progress achieved by the UAE.”

The final piece of installation on the facade will mark the beginning of the final construction phase in a building designed to cement the UAE's leading position as a hub for creativity, innovation, and unique architecture.

His Highness Sheikh Mohammed Bin Rashid also stated that the Museum of the Future has become a global icon due to its one-of-a-kind design and will be a unique addition to Dubai's marvelous architectural milestones.

His Highness Sheikh Mohammed Bin Rashid inspected the Museum's progress at the project’s site at Dubai Future District. His Highness Sheikh Mohammed Bin Rashid was given a detailed explanation by the team at the Dubai Future Foundation overseeing the project on the most important design aspects, engineering methods, and the advanced technological solutions employed in achieving the construction of the most urban landmark in the world.

During the tour, His Highness Sheikh Mohammed Bin Rashid was accompanied by His Highness Sheikh Hamdan bin Mohammed bin Rashid Al Maktoum, Crown Prince of Dubai and Chairman of Dubai Executive Council, and Chairman of the Board of Trustees of Dubai Future Foundation, DFF; and His Excellency Mohammad bin Abdullah Al Gergawi, Minister of Cabinet Affairs and Vice Chairman of the Board of Trustees and Managing Director of the Dubai Future Foundation, DFF.

HH Sheikh Hamdan bin Mohammed bin Rashid Al Maktoum, Dubai Crown Prince and Chairman of The Executive Council of Dubai and Chairman of the Board of Trustees of Dubai Future Foundation said: “In line with the vision of His Highness Sheikh Mohammed bin Rashid, we are always seeking to push the boundaries of excellence and leadership. Today we stand before one of the most innovative buildings in the world that is a testament to Dubai and the UAE’s excellence in creative design, engineering, and architectural innovation.”

“We are developing strategies that will shape the industries of the future. Our goal is to adopt new models for future governments by bringing about a comprehensive change in government systems.”

The Museum of the Future is considered an engineering miracle at 30,000 square meters and 77 meters in height. The building consists of seven floors and characterized by the absence of columns inside, making its engineering design a milestone in urban engineering. The Museum is also linked by two bridges, the first extending to Jumeirah Emirates Towers, with a length of 69 meters, and the second linking it to the Emirates Towers metro station, with a length of 212 meters. The building is powered by 4,000 Mega Watts of electricity produced through solar energy by a new station connected to the Museum. The station was built in collaboration with Dubai Electricity & Water Authority (DEWA), making the Museum upon completion, the first Museum in the Middle East to obtain a Platinum certification from LEED, the highest rating for green buildings in the world. The park surrounding the Museum of the Future contains 80 species of plants, equipped with a state-of-the-art intelligent and automatic irrigation system.

The facade of the Museum consists of 1,024 pieces entirely manufactured by robots. The facade panels are produced using automated robotic arms. Each plate consists of four layers, and each layer has been created after following 16 process steps. The installation period of the external facade lasted for more than 18 months, and each of the panels installed separately. The facade area is 17,600 square meters. The facade, which extends over more than 17 thousand square meters, is illuminated by 14 thousand meters of lighting calligraphy. The writings are inspiring quotes of His Highness Sheikh Mohammed Bin Rashid Al Maktoum, the Vice-President and Prime Minister of the UAE and Ruler of Dubai “May God protect him” in Arabic calligraphy.

The Arabic calligraphy was designed by the Emirati artist Mattar Bin Lahej. Among the quotes of His Highness, Sheikh Mohammed Bin Rashid engraved on the external walls of the Museum are: "We may not live for hundreds of years, but the products of our creativity can leave a legacy long after we are gone. "The future belongs to those who can imagine it, design it, and execute it... The future does not wait... The future can be designed and built today."

The Museum of the Future is considered an unparalleled urban icon around the world. It won the Tikla International Building Award as a unique architectural model. There is no other building in the world constructed on superior technologies, thereby distinguishing it from other landmarks. Autodesk Design Software stated that the Museum of the Future is one of the most innovative buildings in the world. The building was designed by Engineer Sean Keila to offer visitors an interactive experience that is the first of its kind. The Museum of the Future is a real engineering miracle, as is evident after the completion of its external façade. It floats without foundations, pillars, or columns, thanks to the use of the latest technologies. In the design of its iconic exterior, meticulous engineering calculations were used through advanced software on giant computers with ultra-fast processors to calculate the best, most durable, and responsive curve formulas to design its foundations, solid metal structure, and its unique external interface.


An incubator for future ideas, technology, and projects

Contrary to the usual concept of traditional museums based behind closed windows displaying eras of the past, masterpieces, and encounters, the Museum of the Future is distinguished by being an incubator for innovative ideas, technology, and future projects. It is a global destination for inventors and entrepreneurs. The Museum also provides its patrons with a set of immersive experiences. It enables them to learn about future technology that will change people's lives.

The Museum of the Future, with its unique design in the flow of Arabic artistic calligraphy and the luster of liquid metal, is one of the most famous, modern, and urban designs in the world. It is most distinctive in terms of architecture and in the unique elements designed using exceptional engineering employing the latest advanced technologies in the design and construction processes. The Museum’s engineering infrastructure was developed in cooperation between "BAM International," the main contractor, and "Borough Happold Engineering Consultants," which designed the engineering structure. An immersive experience, the Museum has seven floors that employ the latest technologies of virtual and augmented reality, big data analysis, artificial intelligence, and human-machine interaction to provide immersive experiences for visitors answering several pressing questions related to the future of humanity, cities, human societies, and life on planet Earth.

The Museum’s design is a model of sustainability in future creative design. Its exterior façade was designed from advanced glass manufactured with new technologies to improve the quality of interior lighting and external thermal insulation. The use of energy-saving LED light bulbs extending into the exterior panels of 14 km long gives the facade of the Museum of the Future an attractive appearance, even more so at night. The Museum also provides an integrated infrastructure to supply electric vehicles with clean energy. The building generates its renewable energy from sunlight through an independent station for the Museum to collect solar energy. The lighting systems can be fully controlled, adding an aesthetic touch to the Arabic calligraphy design and enhancing the splendor of the exterior design from various sides. With complete fluidity and unprecedented advanced technology, the structure of the Museum of the Future is unique in a whole flow in which the glass facades, thermal, air, and water insulation systems and the metal structure merge as a single homogeneous mass like a giant shiny drop of the metal mercury.

During the construction of the Museum of the Future, futuristic technologies were used in various stages of design, foundation, construction, and cladding. The requirements for completing the internal structure were calculated using advanced mathematical algorithms to include 2,400 crossed steel pieces and thousands of triangular pieces that enhance the durability of the external structure.


Eye on the future

The Museum of the Future is situated in a strategic location in the very heart of Dubai.
With an eye on the future, the Museum is situated at the "Dubai Future District" that includes the Emirates Towers, the 2071 area of the Dubai Future Foundation, the Dubai World Trade Center, and the Dubai International Financial Center.

It is an area that is the largest in the region committed to exploring the future.