Jubail Island Investment Company (JIIC) has announced the appointment of Gulf Contractors Company (GCC) to commence enabling works for the AED5 billion Jubail Island that was recently launched in Abu Dhabi. Enabling works are scheduled for completion in January 2020. 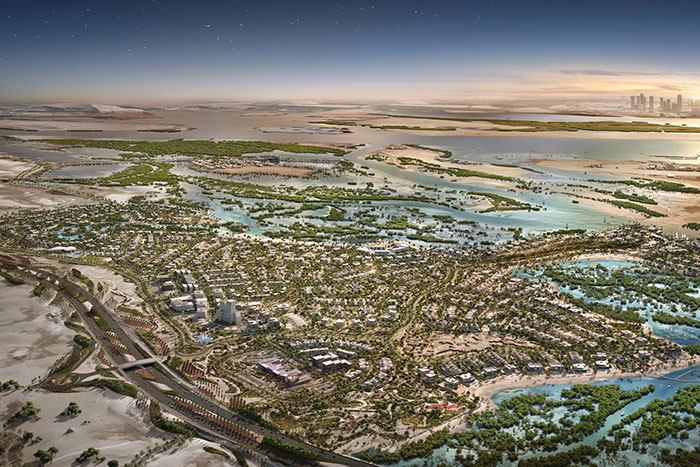 Enabling works are generally associated with large-scale land development projects and entail major earthworks and grading of the site, ahead of the installation of infrastructure such as roads, utilities, and other facilities. For this significant contract, over 2.5 million cubic metres of material will be excavated and placed to create the formation level for over 40 kilometres of roadways and more than 800 residential properties.

In developing the grading plan for the community, the design team optimised the distinctive and unique features of the site, such as the hills at the North and West ends of the development to enhance the overall character of the property, as well as maximise expansive views of the waterfront and downtown skyline.

Mounir Haidar, Managing Director of JIIC, said: “We are delighted to announce the appointment of the contractor for enabling works which are slated for completion in early 2020.
“Offering housing, commercial, leisure and freehold investment opportunities for Emiratis and expatriates is a central planning element for Jubail Island and today’s announcement confirms the timely delivery of the newly launched project in conformity with leading construction and environmental standards.”

Mounir Haidar added: “Jubail Island will include wildlife preservation areas and other conservation zones, complementing an elegant residential and commercial setting in a low-density community. This unrivalled combination will contribute to shaping a premier investment destination in the capital city of Abu Dhabi.”

As an attractive investment zone at a 10-minute distance from downtown Abu Dhabi, Jubail Island offers easy access to several key attractions in the UAE capital and is only a 50-minute drive from Dubai Marina.

Poised to become Abu Dhabi’s most sought-after residential sanctuary for wellness and nature enthusiasts, Jubail Island spans 400 hectares and will comprise a mix of serviced plots, high-end and mid-range properties, as well as retail, office park and F&B outlets.

With a Pearl Rating from Abu Dhabi’s Estidama certification system, the project is also set to significantly enhance the island’s natural ecosystem through planting new mangrove forests, as well as adding extensive canals and other new marine habitats that will be home to migratory birds, fish populations, sea turtles, and gazelles. The development will also boast generous outdoor areas and include parks, hiking paths, kayaking stations and cycling routes for nature lovers and water sports enthusiasts.