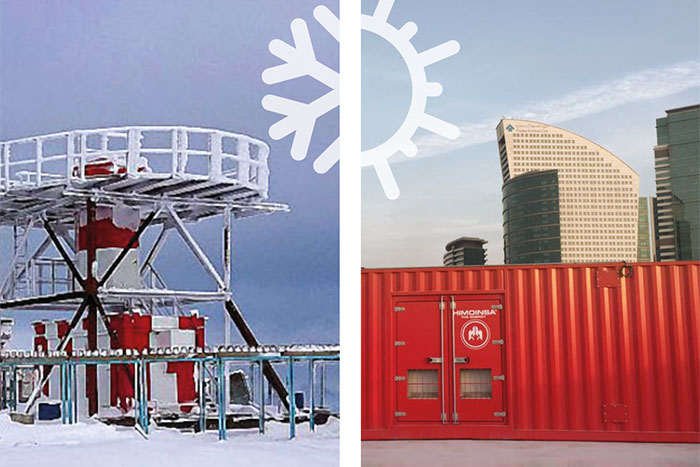 "It is not the strongest of the species that survives, nor the most intelligent that survives. It is the one that is most adaptable to change”, stated the British naturalist Charles Darwin. This lack of environmental adaptation means that we cannot carry out our activity at 100%. This process of a reduction in rated working capacity is known as "derating", and its effects are the same as with generator sets when there are changes in the environment in which they usually work, meaning it is necessary to apply modifications in generators so they can operate normally. Therefore, before selecting the characteristics of the generator set, it is necessary to clearly identify the conditions of the environment in which it will be operating.

There are four main determining factors in the viability study of a generator set in the face of extreme climatic environments:


Climates with a -10°C or over 40°C ambient temperature, humidity above 70%, or a desert environment with a large amount of airborne dust are clear examples of extreme environmental conditions. All these factors can cause problems and shorten the service life of generator sets, both if they work on standby, since they have to remain stopped for long periods of time, or continuously, as the engine can easily heat up due to the number of working hours, and even more so in dusty environments.


What can happen to my generator set in extreme hot or cold conditions?

We understand extremely cold climates for the generator set to be when the ambient temperature may cause some its components to fall to freezing level temperatures. In a climate below -10 ºC the following can happen:
On the contrary, extremely hot environments (over 40 ºC) essentially lead to a reduction in power, due to the variation of the air density and its O2 concentration to carry out the combustion process. There are particular cases for environments such as:
In addition to temperature, pressure and humidity, there are other factors that can affect the operation of the generator set:


Recommended configuration according to the location of the generator set

The generator set manufacturers take certain measures to avoid the inconveniences described above. Depending on the type of environment we could apply the following.

In extreme cold climates (<-10 ºC), the following can be included:
In climates with extreme heat (>40 ºC):
HIMOINSA, with nearly 40 years of experience in the manufacture of generator sets, has developed multiple projects on sites with extreme climates yielding successful results. Some of these from recent years are:

A correct configuration of your generator set and the carrying out of preliminary studies on the climatology of the equipment's location (temperature, humidity conditions, pressure and atmospheric pollutants) will help extend the useful life of your generator set and keep its performance in perfect state, in addition to reducing maintenance tasks with the suitable accessories. HIMOINSA's complete and experienced technical engineering team always performs these preliminary studies on site, and can help you make the most suitable configuration decisions for your project.