This genset guarantees reduced operating costs. Its fuel consumption is inferior to that offered by other models of similar characteristics and power output, which makes it a competitive option for the market. 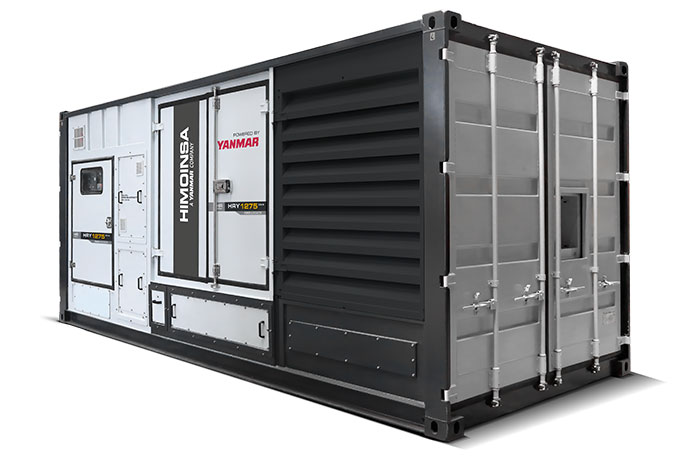 The new HRYW-1275 D5/6 dual-frequency model in a special 20-foot container is a generator set with a 1,000-litre capacity tank and a power in P.R.P. of 1,278 and 1,305 kVA for 50 and 60 Hz respectively, perfect for continuous work during long periods of time and in myriad applications: mining, construction, oil extraction, events, ports...

The HRYW-1275 D5/6 is a genset that guarantees reduced operating costs. Its Opex is inferior to that offered by other models of similar characteristics and power. Its fuel consumption is 182.2 L/h at 75% of the load (50Hz) and 189.8 L/h at 75% of the load (60Hz), which makes it one of the most competitive generators on the market in terms of operation and maintenance costs, something highly valued for prime applications, among others the rental sector, where the generator set works non-stop.

How have such low levels of fuel consumption been achieved?

This new generator incorporates Yanmar engine, model AY40L- ET. The AY40 engines incorporate the exclusive YANMAR patented “ASSIGN” combustion technology that ensures the best fuel consumption in its class for the entire operating profile, with a highly reliable mechanical control system, considerably reducing noise and smoke emissions.
It is the first HIMOINSA heavy-duty generator with a Yanmar engine, which has been designed in close collaboration between the engineering teams of Yanmar and HIMOINSA in order to achieve the highest levels of quality, robustness and the maximum performance required to satisfy the power generation market needs. HIMOINSA became part of the Yanmar Group in 2015 and during this time industrial and commercial synergies between the two companies have been intensified in order to strengthen their position in the international market.

Yanmar's goal is to design engines guaranteeing the highest levels of reliability in order to ensure an excellent user experience. Therefore, its engines, turbos and power systems are designed and adjusted to work at the Best Efficiency Point (BEP), both in variable load applications (PRP) and in fixed load applications (COP). This allows the best efficiency in fuel consumption, ensuring a lower OPEX than other options on the market, says Miguel Ángel Ruiz, Global Engineering and Development Head at HIMOINSA.

In addition, the HRYW-1275 D5 / 6 generator set incorporates a variable speed remote cooling system, which has been jointly designed between the Yanmar and HIMOINSA development teams, which has allowed for maximum optimization of their energy consumption.

This model incorporates a parallel control unit, easily accessible thanks to its independent external door, which allows the genset to be connected to other generators, thereby increasing the potential power according to the requirements of each project.

The HRYW -1275 D5/6 features multiple systems and components that make it one of the most competitive models on the market:

To facilitate the operating and maintenance tasks, there are LED lamps inside the new model. In addition, to guarantee the strictest levels of security, this generator has a leak detector, smoke detector and a light and sound beacon that warns of any type of alarm.

The genset is able to include the remote monitoring of the equipment so that it can be managed remotely.

HIMOINSA has worked on a design that guarantees the easy transport and handling of the equipment. The 20-foot leak-proof sealed container has a special design that has been certified for sea transportation. In addition, it incorporates multiple external accesses to facilitate maintenance tasks. Its wide doors have been strategically located next to the main accessories and components of its interior in order to guarantee accessibility and to allow the equipment to be easily operated and manipulated.

A coolant pre-heating system with a built-in pump, a water separator filter or an oil refill kit (Valve + Tank) can also be included as optional extras. In order to lengthen maintenance intervals and reduce operating costs, an automatic crankcase oil filling system can be incorporated, in this way the user ensures that the oil level is always right before replacing them at 500h.

Several of the world’s leading rental companies have already experienced the advantages of adding this generator to their fleet. The HRYW-1275 D5/6 model has supplied power to major events, mining projects in South Africa, and various applications in deserts in the Middle East, withstanding extreme temperatures. The results obtained have corroborated its excellent performance in the most demanding projects.

Mad Cool Festival Madrid (Spain): The AY40 supplied energy in P.R.P. to different points of the festival site. Its parallel control unit let that it could be connected to other gensets, thereby guaranteeing the necessary power at all times.

Newcastle Coal Mine (South Africa): For about a month, the generator set runs 24/7 without interruption in extreme environmental conditions. The high temperatures, the dusty environment of the coal and the variable power loads demonstrated the robustness and high quality of this generator set.