HIMOINSA has held the “Rental Power Workshop” which has attracted around a hundred people keen to talk about the new emission standards, in other words, EU Regulation 2016/1628, for non-road mobile machinery (NRMM) and how this affects generator sets for the rental market. 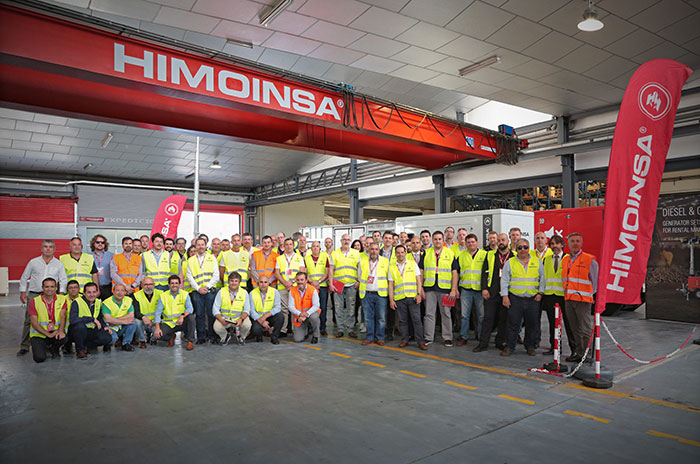 Yanmar, Fpt and Scania engine manufacturers, as well as European rental companies and the specialist press, have come together to discuss new market trends.

In this new Stage V scenario, the first development has come from engine manufacturers who have incorporated new exhaust after-treatment systems, ensuring a reduction of up to 90% in emissions of harmful components compared to the previous Stage IIIA technology. During the working sessions, attendees were able to discover in detail the solutions that Yanmar, Fpt and Scania have come up with. These are the three engine manufacturers with which HIMOINSA is developing its S5 range of generator sets with Stage V engines, with a power range of 9 to 550 KVA.

“During the development of the new design, we are taking into account factors such as maintenance, durability, fuel consumption, and the final cost of the machine", explains Carlos Ibáñez, Operation Director at HIMOINSA SL.

Companies such as Ramirent, Hertz, Kiloutou, Loxam, Midas, Bredenoor discovered the new developments in which HIMOINSA is working to meet the new requirements of the rental market, and they expressed great interest in the gas-powered rental generator sets with Stage V certification. “Without a doubt, this is an increasingly interesting option for rental companies seeking ever more silent and clean equipment", said Manuel Aguilera, Gas Product Manager at HIMOINSA.

With more than 35 years of experience, HIMOINSA has in-depth knowledge of the needs of rental companies and it is constantly working on new developments. The well-established range of rental generator sets was joined some time ago by the Silent Plus range to guarantee low noise levels, as well as other components such as the HGManager fleet manager, or the full range of lighting towers. The company recently launched new power distribution solutions such as a transformer substation in a 20x10 foot container, and it is now introducing their new generator sets with Stage V engines.

During the factory visit, attendees were able to see the new layout in which HIMOINSA is working to further optimize its production process and implement innovative metal treatment techniques in order to remain best-in-class as far as the quality of its canopies is concerned.

Without a doubt, a number of working sessions that made it possible to bring together in the same space some of the major players in the European rental sector; engine manufacturers, generator set manufacturers, rental companies and the specialized press.