Hyperloop Transportation Technologies, provided a first look of their full-scale passenger Hyperloop capsule today at an unveiling ceremony in Puerto de Santa Maria, Spain. The event was also held to commemorate the five-year anniversary of the founding of HyperloopTT and showcased the company’s progress since it was established as the first Hyperloop company in the world.

The capsule, “Quintero One” is constructed almost completely out of HyperloopTT’s VibraniumTM, a specially made dual-layer smart composite material. It was built at the Southern Spain aerospace facilities of HyperloopTT’s partner Airtificial, a new company formed by the merger of composite expert Carbures and engineering company Inypsa that manufactures for many leading companies including Airbus and Boeing. The design for the capsule was created in collaboration with world renowned transport design consultancy PriestmanGoode and won the Gold award at the 2017 London Design Awards 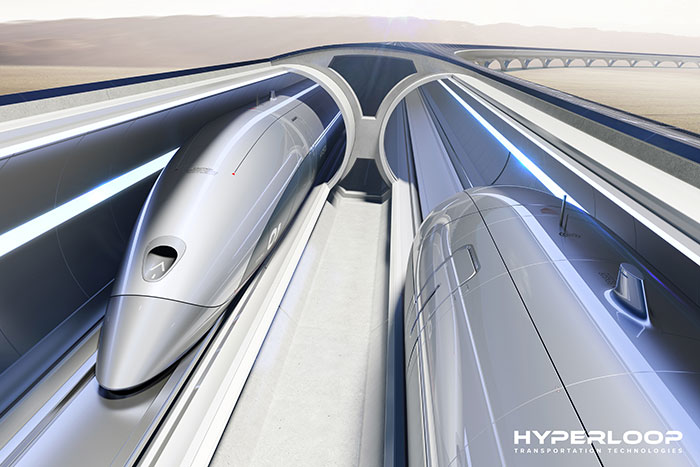 The capsule will be delivered to HyperloopTT’s research and development center in Toulouse, France for additional assembly and integration into the system, before it is used on one of the first commercial tracks.

“Working together with engineers from HyperloopTT, we are proud to be pushing the envelope of smart materials in transportation and manufacturing,” said Airtificial Co-Founder and Chairman, Rafael Contreras. “Today we have unveiled a new type of transportation vessel built with an industry high percentage of composite, which makes the Hyperloop capsule perhaps the safest transportation vehicle in the world.”

“The creation of this capsule represents over a year long journey of the best expertise in design, engineering, and the development of cutting edge materials,” said Dirk Ahlborn HyperloopTT co-founder and CEO. “In just five years we have solved and improved upon all of the technology needed for Hyperloop with our new levitation system, vacuum pumps, batteries, and smart composites. This capsule will be a part of one of the most efficient transportation systems ever made.”

“In 2019, this capsule will be fully optimized and ready for passengers,” said Bibop Gresta, chairman and co-founder of HyperloopTT. “Since we have taken major steps in solving government regulations with our safety certification guidelines and insurance frameworks, we are now closer than ever to bringing Hyperloop to the world.”

Recently, HTT became the world’s first company to be able to offer an insured commercial system. In collaboration with Munich Re, the world’s largest reinsurance company along with global certification and inspection company TÜV SÜD, governments and partners, HTT is creating the first regulatory guidelines and creating the necessary legal framework for Hyperloop systems around the world.