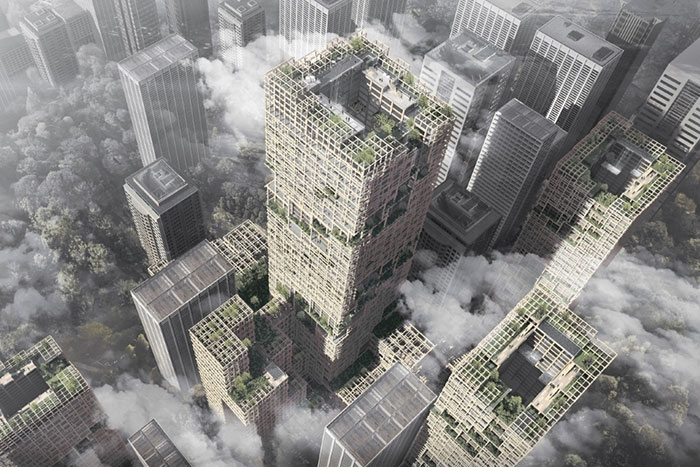 One of the highlights will be Nikken’s W350 $5.5 billion mixed-use design project, which will be home to the tallest wooden skyscraper in the world, set to be built in Tokyo, Japan.

Climbing 350 metres, the tower will claim two accolades, the tallest building in Japan and the highest wooden structure in the world when it eventually opens in 2041, which coincides with construction company Sumitomo Forestry’s 350th anniversary.

The 70-storey tower, which is nearly four times higher than the existing record holder for a timber structure, the 18-storey Brock Commons Student Residence in Vancouver, will be made almost entirely of timber, employing 185,000 cubic metres of wood to construct 90 per cent of the structure and will adopt a braced tube design with columns and beams made from steel and wood.

The mixed-use development consists of commercial offices, residential apartments, a hotel, retail outlets, water features and a roof garden. The entire structure would also be enveloped with balconies, covered in greenery.

“Our vision for this structure was to contribute positively towards turning Tokyo into a more environment-friendly city and to support its transformation into an urban forest. The greenery which cascades down the full length of the building, affords an organic aspect, as plants adapt in terms of daylight hours, temperature and altitude,” said Dr. Fadi Jabri, Executive Officer, Principal responsible for MENA, CIS and India regions.

Nikken is also showcasing Vondny Mir, a 140 metre mixed use high-rise in Moscow, consisting of serviced apartments, a shopping mall, conference rooms, sports facilities and office space.
In terms of Dubai-based projects, Nikken Sekkei’s burgeoning portfolio includes the twin-tower complex, One Za’abeel, with the tallest tower reaching more than 300 metres high situated adjacent to the Dubai World Trade Centre, in the new financial district. This unique complex will include a residential tower with apartments, a five-star hotel tower and a commercial tower, with office space and the Gallery, a retail destination.

“Standing proudly in the heart of Dubai, this building represents the ambition, innovation and pioneering spirit of Dubai, as a cosmopolitan 21st century city,” added Dr. Jabri.

Other interesting projects include Tadawul HQ (Saudi Stock Exchange) in Riyadh. The construction of this super structure is complete, with preparation ongoing for interior fit out, featuring state-of-the-art technologies and on track to achieve LEED GOLD.

Another project being showcased by Nikken at Cityscape Global, that is bound to generate a lot of interest amongst football fans, is the latest design updates and progress at the Futur Camp Nou, FC Barcelona’s iconic football stadium, which will be expanded and renovated at a cost of Euros 380 million.

The proposal requirements include plans for complete refurbishment, a roof installation, and a capacity increase from 99,000 to 105,000 spectators, with construction due for completion by 2021.

The projects on show at this year’s Cityscape Global have been designed by Nikken Group, which includes Nikken Sekkei, Nikken Space Design and Nikken Housing System. They all fall under the theme of ‘Experience Integrated’, which is the new tagline after the extensive company rebrand from nikken.jp to Nikken.

“Our regional office in Dubai has extended our reach to over 20 cities, exporting our core organic values, design ethos and creative talent, throughout the MENA region, the CIS and India.”