Margraf Marble and Art - A Pairing That Stays Fresh and Vibrant

Bringing together marble and art is one of the ways in which Vicenza-based Margraf promotes culture and raises awareness of the exceptionally beautiful, unique and unfailingly original material that it has been providing for more than 100 years.

The company has embarked on numerous initiatives in the field of art, including a partnership with the Venice Pavilion at the Venice Art Biennale, a sculpture symposium at its site in Chiampo (near Vicenza), and efforts to push stone processing beyond the established boundaries using futuristic CNC machining techniques, as seen in the ground-breaking “Arcolitico” and “Ripple” at the Margraf Area in Gambellara (near Vicenza). 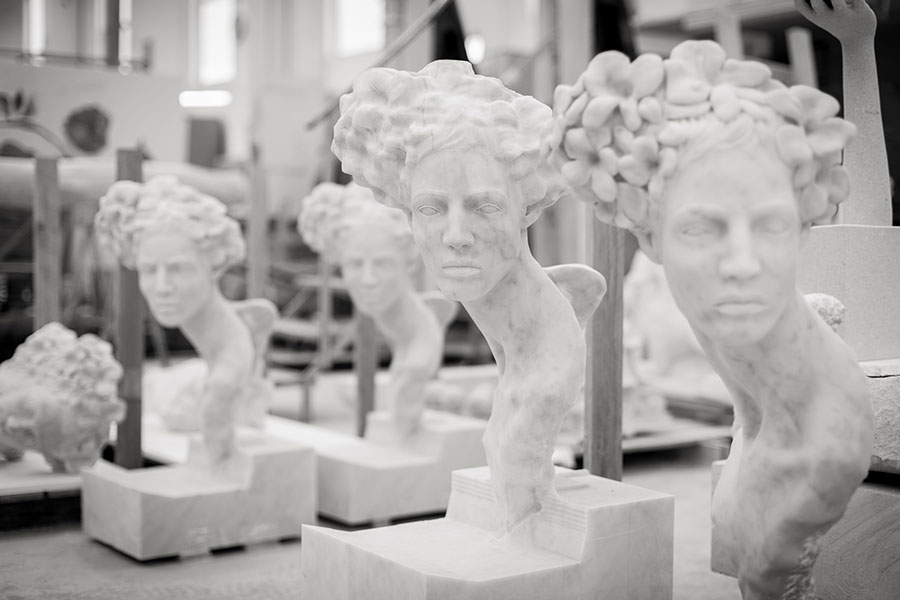 As well as its innovative spirit, Margraf is renowned for its exceptional technical and production capacities, which are unparalleled on a global scale and pave the way to success in even the most challenging areas. This has led to a joint project with Veronesi Italia, an import-export contractor that specializes in trade with Cuba. Margraf has been selected by Rafael San Juan, an acclaimed artist and professor from the island, to produce marble recreations of his monumental recycled steel work “Primavera”, which pays tribute to the strength of Cuban women.

“Using techniques that call to mind Renaissance masters, Rafael San Juan has studied every part of the human body, delving deep into its marvellous natural mechanics. Few artists of his generation have shown such an impressive capacity to find the hidden meanings of life and the magical chords of the soul. Instead of just gathering fragments, the accomplished young artist is capable of dispensing with spaces, breathing life into virtual reality and emerging in the immanence of things. It is as if he has found the philosopher's stone: with his images and structures, he manages to recreate – rather than reproduce – the truth that human beings believe they can find in the Universe,” states historian Eusebio Leal Spengler, who is the Director of the Restoration Programme for Old Havana (a UNESCO World Heritage Site), the Chairman of the Monument Protection Committee in the city, a former deputy in the National Assembly and a United Nations Goodwill Ambassador, not to mention a promoter of this initiative.

The strength and melancholy pride of Cuban women is encapsulated by the mighty “Primavera”, which is more than 8 metres tall and stands on the Havana seafront. Working alongside Margraf, the artist himself has recreated it in a selection of ten numbered pieces on a smaller scale. Eight of them are made of Bianco Carrara and Grigio Carnico, while a single piece of Bianco Carrara was used to produce the other two. The items are signed by Rafael San Juan and each one will have a little detail that is different from the others, meaning that they will all be unique. They will go on display and be sold to museums, art galleries and private collectors all over the world.

Margraf is working in tandem with Veronesi Italia on numerous projects in Cuba, first and foremost among which is supplying prized marble for the restoration of El Capitolio in Havana. All of this underlines its status as a leading exponent of Italian excellence worldwide.