High-voltage direct current cables which can efficiently transport electricity over long distances play a vital role in our electricity supply. Optimising their performance is therefore an important challenge. With that aim in mind, scientists from Chalmers University of Technology, Sweden, present a new insulation material up to three times less conductive, offering significant improvements to the properties and performance of such cables. 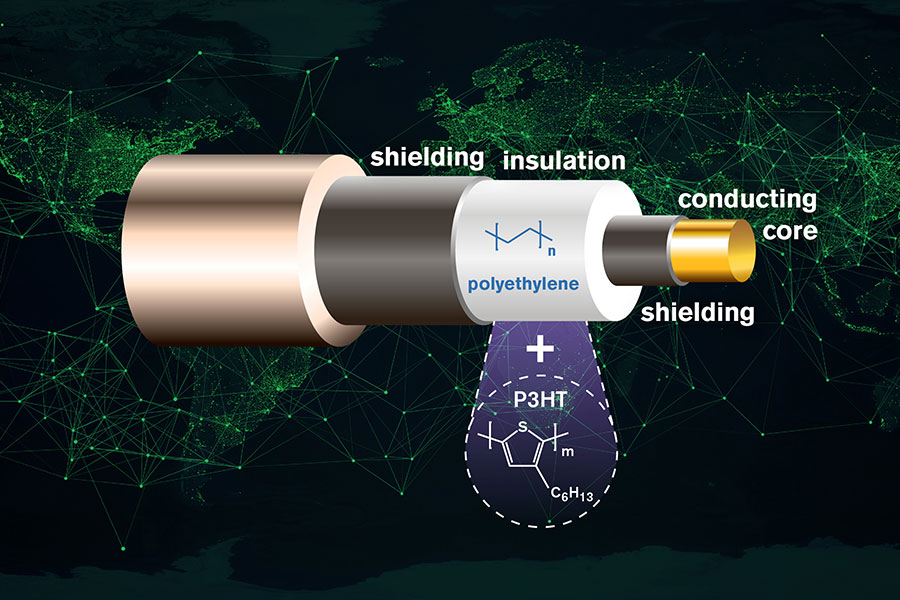 If we are to transition to a world powered by renewable energy, efficient long-distance transport of electricity is essential, since the supply – renewable energy sources such as wind and solar farms, as well as hydroelectric dams – is often located far from cities, where most of the demand exists. High voltage direct current cables, or HVDC cables, are the most efficient means of transporting electricity over long distances. HVDC cables with an insulation layer can be buried underground or laid on the seabed, allowing for considerable expansion of networks, and many projects are currently underway to connect different parts of the world. In Europe, for instance, the NordLink project will connect southern Norway and Germany, and HVDC cable projects form a significant part of the energiewende, Germany's overarching plan to move to a more environmentally sustainable energy supply.

“For us to handle the rapidly increasing global demand for electricity, efficient and safe HVDC cables are an essential component. The supply of renewable energy can fluctuate, so being able to transport electricity through long distance networks is a necessity for ensuring a steady and reliable distribution," says Christian Müller, leader of the research and Professor at the Department of Chemistry and Chemical Engineering at Chalmers University of Technology.

During transport, as little energy as possible should be lost. One way to reduce transmission losse such as this is by increasing the direct current voltage level.

"However, an increase in the transmission voltage adversely affects the insulation of an HVDC cable," explains Xiangdong Xu, research specialist at the Department of Electrical Engineering at Chalmers University of Technology.

"The resulting higher electric field stresses could be handled if the electrical conductivity of the insulation material was reduced sufficiently.”

The researchers now present a novel way to reduce the conductivity of an insulation material.


A material that gives the cables three times lower conductivity

The basis of the new material is polyethylene, which is already used for insulation in existing HVDC cables. Now, by adding very small amounts – 5 parts per million – of the conjugated polymer known as poly(3-hexylthiophene), the researchers were able to lower the electrical conductivity by up to three times

The additive, also known as P3HT, is a widely studied material, and given the tiny amounts required, opens up new possibilities for manufacturers. Other possible substances that have previously been used to reduce the conductivity are nanoparticles of various metal oxides and other polyolefins, but these require significantly higher quantities.
“In materials science, we strive to use additives in as small quantities as possible, in order to increase the potential for them to be used in industry and for better recycling potential. The fact that only a very small amount of this additive is required to achieve the effect is a big advantage,” says Christian Müller.


A discovery that could lead to a new research field

Conjugated polymers, such as P3HT, have been used in the past to design flexible and printed electronics. However, this is the first time they have been used and tested as an additive to modify the properties of a commodity plastic. The researchers therefore believe that their discovery could lead to numerous new applications and directions for research.

“Our hope is that this study can really open up a new field of research, inspiring other researchers to look into designing and optimising plastics with advanced electrical properties for energy transport and storage applications," says Christian Müller.