Pandre Special Architecture, a boutique design practice based in Dubai which specializes in multi-family residential projects, has won the ‘Outstanding use of American Hardwood in the Middle East’ award for its Nad Al Sheba Garden Pavilion at the Commercial Interior Design (CID) Awards 2018, which took place on Wednesday, September 19, 2018 at the Joharah Ballroom, Madinat Jumeirah, Dubai. The award, which was sponsored by the American Hardwood Export Council (AHEC) for the seventh time, was presented by Roderick Wiles, AHEC Regional Director, and Kurt Seifarth, Regional Agricultural Counselor for the United States Foreign Agricultural Service, to Mark Klever, Head of Design, Pandre Special Architecture. 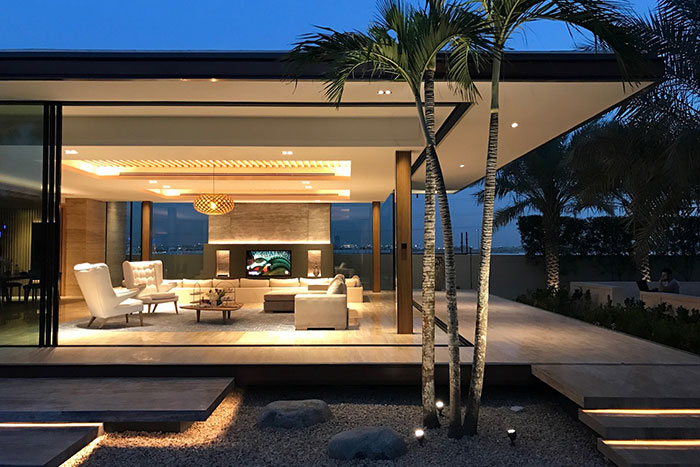 Pandre Special Architecture was praised by the judges for their ‘extensive and thoughtful use of American hardwoods in this modern annex project, which complements the traditional majlis inside the villa’. Highly commended in the category were AIC Design for Optifashion, the eyewear store in Dubai’s La Mer precinct, which smartly incorporated American hardwoods into a Fibonacci Sequence inspired design. Also shortlisted for the award were Doubletree by Hilton, Bay Square by Design Worldwide Partnership; Intercontinental Hotel Resort Spa & Gym by Esadore Creative; Renaissance Downtown Hotel fit out by Khansaheb Interiors; and Little Miss India by Bond Interiors. Overall, the category this year attracted a record number of nominations from across the region.

According to Klever, the design intent was to create a place of hospitality, entertainment, relaxation and reflection; an informal, modern annex that complements the ‘formal’ Majlis located inside the more traditional family villa. As such, the cantilevered roof and opening glass walls create an open, peaceful, shaded outdoor living area enabling the owners to experience the tranquil ebb and flow from the Majlis out to a landscaped garden. The canopy roof, supported by four columns, acts as a tent poled awning stretched over all the internal components camped within. Further, the functional components of kitchen, and washrooms are stand-alone rooms clad in stone and timber and are separated by views to pocket gardens.

“This project gave us as designers an opportunity to develop many custom built elements throughout, particularly in timber. American hardwoods have been used in a number of areas across the project such as American oak for the flooring, cladding and columns as well as for the bespoke tables and chairs. Black-stained American oak was also used for the custom-designed dining table, whilst oak was also used for the ceiling cladding and panelling,” said Klever. “The interior design brief was to provide a complimentary experience to the existing formal majlis in the main villa. Through the use of warm timbers and natural stone, we were able to create a beautiful and comfortable space to enhance the relaxing indoor-outdoor living experience.”

Now in its 12th edition, this year’s CID Awards gathered nearly 1,000 members of the Middle East’s design community under a single roof. Spanning 18 categories, the awards covered the whole spectrum of commercial interiors, from hospitality to retail and public sector to office design. The awards programme also focused on recognising the people who shaped the projects of the year, with categories such as Behind the Scenes, Young Interior Designer of the Year and Interior Designer of the Year prizes.

“We were delighted to be able to sponsor these prestigious awards yet again and to support the immensely talented, diverse and burgeoning design community in the Gulf. The winning design creates an excellent showpiece for American hardwoods in the Middle East, which are extremely well established as a design material. Sustainable American hardwoods are now beginning to enter new and exciting commercial markets and as the world re-embraces timber as a building material, it is hoped that they will become recognized more for the possibilities they can offer in all aspects of design and construction,” concluded Wiles.