His Highness Sheikh Saud bin Saqr Al Qasimi, UAE Supreme Council Member and Ruler of Ras Al Khaimah, was present at the signing of an agreement between Etihad Rail, the developer of the UAE’s National Rail Network, and Ras Al Khaimah’s Stevin Rock, one of the largest quarrying companies in the world. Under the terms of the agreement, Etihad Rail will transport raw materials from Ras Al Khaimah to Abu Dhabi. 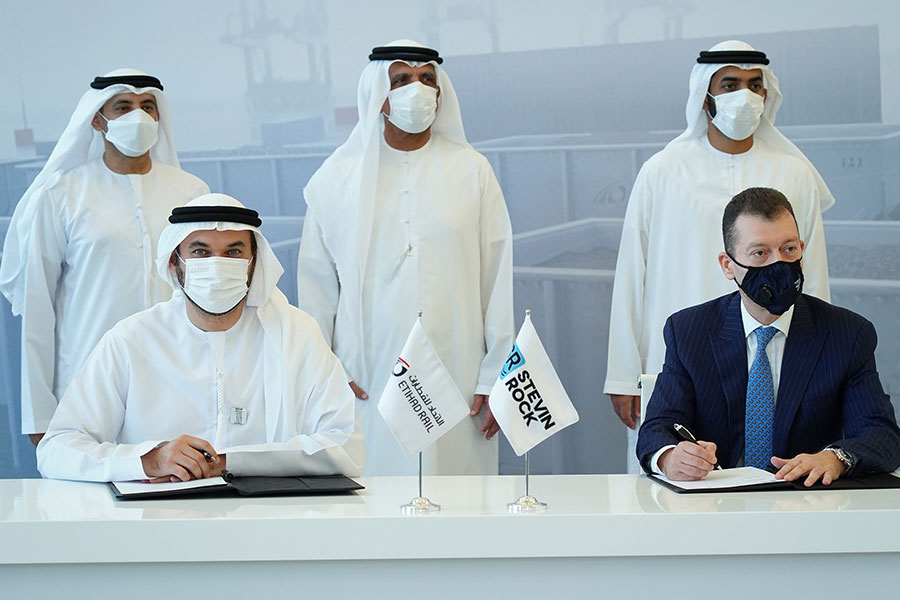 The agreement between the two entities was signed by their respective figurehead, CEO of Etihad Rail, Shadi Malak and General Manager of Stevin Rock, Eng. Naser Bustami. The signing ceremony was witnessed in the presence of several executives and officials from both organisations. 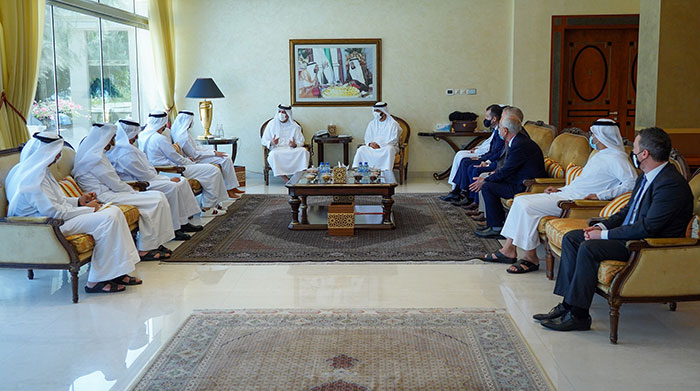 This agreement is of considerable significance as the first in a series of commercial agreements for Stage Two of the UAE National Rail Network, which sees major organisations based in the UAE connected throughout the Emirates, via Etihad Rail’s highly anticipated national railway network, which stretches over 605 kilometres from Al Ghuwaifat on the UAE’s border with Saudi Arabia in the west to the port of Fujairah on the eastern coast. An estimated 3.5 million tonnes of construction material will be carried annually from Stevin Rock’s Al Ghail quarry in Ras Al Khaimah to Abu Dhabi, through 500 annual train trips. Each train will measure one kilometre in length, hauling 70 wagons that will have a carrying capacity of 7,000 tonnes per journey. The agreement will have significant environmental benefits, with an annual reduction of 100,000 truck trips.

Commenting on this partnership, Shadi Malak said: “Following the directives of His Highness Sheikh Theyab bin Mohamed bin Zayed Al Nahyan, Chairman of the Abu Dhabi Crown Prince's Court and Chairman of Etihad Rail, our company inhabits a pivotal role in the logistics, infrastructure, and transport sectors across the UAE, to support and enhance our customers’ business models and competitiveness. By connecting with quarries in the Northern Emirates, Etihad Rail will ensure faster and more cost-effective delivery of construction materials, which in turn, we continue to deliver on our commitment to contribute to the reduction of carbon emissions by decreasing truck movement on the roads, supporting our overall ethos of a sustainable future and the UAE’s wider sustainability targets.”

“Stevin Rock is one of the largest companies in the global quarrying sector. As a primary company that has signed an agreement with us, they will benefit from the integrated transport solutions Stage Two of the project provides upon completion. Stevin Rock will be one of the first to witness the benefits associated with the interconnectivity that Etihad Rail will establish within the Emirates, transporting their products from Ras Al Khaimah to Abu Dhabi’s logistics hub, the Industrial City of Abu Dhabi (ICAD), in addition to the benefits corresponding with the future planned wider GCC network, which will offer new business opportunities to enhance operations and business models of potential customers,” he added.

Naser Bustami said: “We are proud and happy to have reached an agreement with Etihad Rail that will provide a sustainable alternative to road transport, contributing significantly to Stevin Rock’s continuous efforts to reduce its carbon footprint. Moreover, rail transport will allow us to be more competitive on pricing our products in Abu Dhabi.”
“The national rail network will mark a milestone in the development and prosperity of Ras Al Khaimah and the entire UAE, playing an active role in advancing sustainable development across the country,” Mr Bustami concluded.

Stevin Rock is one of the largest quarrying companies in the world, with a production capacity of over 80 million tonnes per year of limestone, dolomite and gabbro from three quarries.
Stevin Rock has been operating in the Emirate of Ras Al Khaimah since 1978, providing the highest quality materials and services to the construction, cement, steel, mining, glass and chemical industries in the GCC region and beyond. Through using the UAE’s National Rail Network to transport aggregate, Stevin Rock will enjoy enhanced operational efficiency, improved delivery, and an expanded regional supply chain, while reducing greatly the company’s carbon footprint.

Etihad Rail began construction works on the Al Ghail facility, which is part of the freight facilities series the company is developing, in 2020 with the aim of providing transportation services from the quarries of Ras Al Khaimah and Fujairah to the rest of the UAE.

Customers of Etihad Rail will enjoy a wide range of integrated transportation solutions, be that in the movement of materials from production facilities to end-users, or export points, or to storage facilities provided by Etihad Rail. In addition, Etihad Rail implements thorough quality control procedures which are aligned with international best practice, ensuring shipments arrive to their destinations without any damages.

Etihad Rail regularly holds meetings and seminars, communicating with companies in the construction materials industry, including quarrying companies in Al Ghail, Al Taween, Al Siji, Shuka, Masafi, and surrounding areas, to showcase the benefits of connecting Stage Two of the project with quarrying companies, which comes as a strategic step to transport limestone from its sources in the north of the nation to the emirates of Abu Dhabi and Dubai.

The facility of Al Ghail will play a significant role in linking the UAE’s National Rail Network with quarries in Al Siji, Masafi, and Al Taween, enhancing transport of gabbro rock from Fujairah to Abu Dhabi and Dubai, reducing hundreds of conventional road-based truck trips.