Saudi Arabia and the UAE are spearheading a GCC-wide wide surge in demand for fire detection and suppression equipment, as economic growth and increased construction activities put the region’s fire safety market on a double-digit growth path.

Analysts Frost & Sullivan estimate a 15 per cent annual growth rate will see the Gulf region’s fire safety market valued at US$3.15 billion by 2020, predominantly driven by industrial and commercial investments, while segments such as retail, institutional buildings, and public infrastructure are also contributing to new demand.

Fuelled by a residential construction boom, Saudi Arabia currently holds a 46 per cent share (US$644 million) of the US$1.4 billion Gulf’s fire safety market, while the UAE, with a 34 per cent share (US$476 million) is also ramping up demand with the help of developments planned for the Dubai Expo 2020.

Increasing penetration of environment friendly fire suppression agents and advanced fire detection technologies are playing a critical role in shaping the market, all of which will be on display by more than 350 international fire and rescue companies at Intersec 2016, the world’s largest security, safety, and fire protection trade show.

Fire & Rescue constitutes the second-largest section at the 18th edition of Intersec, which takes place from 17-19 January 2016 at the Dubai International Convention and Exhibition Centre. 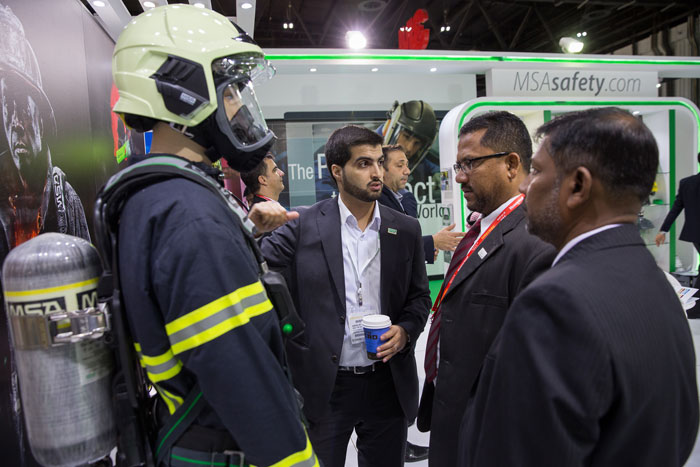 Ahmed Pauwels, CEO of Messe Frankfurt Middle East, said: “Continued investments in the industrial and commercial sectors are among the prime growth drivers of the GCC’s fire safety market, combined with the increasing stress by regional governments on the compliance with fire safety regulations in all new constructions.”

“Fire and Rescue companies are responding to a growing end-user market that is increasingly willing to adopt the latest advanced fire safety measures, and many of these will be seen for the first time at Intersec 2016.”

A new feature at Intersec’s Fire & Rescue section is a dedicated Safety and Design in Buildings Pavilion, where more than 40 exhibitors will showcase their latest fire rated building and construction materials, fire alarms and smoke ventilation systems.

Much of the attention will be on advanced fire and safety features for high-rise buildings, of which the GCC region has plenty; according to the Council of Tall Buildings and Urban Habitat, by the end of 2015, the GCC will be home to 269 high-rise buildings with a height of more than 150 metres. Dubai, according to Emporis, a building information provider, is home to 911 completed high-rises, 88 of which stand taller than 180 metres.

Another US exhibitor, Fike, is looking to expand into new markets, having already been involved in major Gulf projects, including installing one of the world’s fastest fire detection and control systems in Dubai’s Burj Khalifa, the world’s tallest tower. Fike also supplied state-of-the-art systems in Doha and Jeddah International Airports.

The manufacturer of fire detection and extinguishing systems will introduce its fire retardant panels and web based connectivity solutions, which according to Commercial Director Joao Paulo Ajami, will have a big impact on the market.

“We have observed that connectivity is a key trend in the regional fire systems marketplace,” said Ajami. “The fire detection market has been more traditional and slow to incorporate such technologies in relation to other security fields but this will increase substantially in the coming years.

“The Middle East and Africa represents about 30 per cent of our sales volume now, and we are very positive about the upcoming years. Business has increased steadily, and the new solutions we are showcasing at Intersec 2016 will push sales further in the region.”

UAE-based fire detection and protection company Unisafe is a regular exhibitor at Intersec, and will showcase its complete range of branded products. Managing Director Thulasi Ram is equally positive about the market sentiment in the region: “Fire standards are getting more stringent and mandatory across the region, and therein lies a huge potential,” said Ram.

“With Dubai all set to host Expo 2020 and Qatar winning the bid to host the FIFA World Cup 2022, a whole lot of new projects have been announced with construction in full swing thereby resulting in a huge market opportunity.”

Intersec 2016 will also feature a two-day Fire and Safety Conference on 18-19 January 2016, held in partnership with the Dubai Civil Defence, while Critical Infrastructure Conference, and Health & Safety Conference are also set to take place.