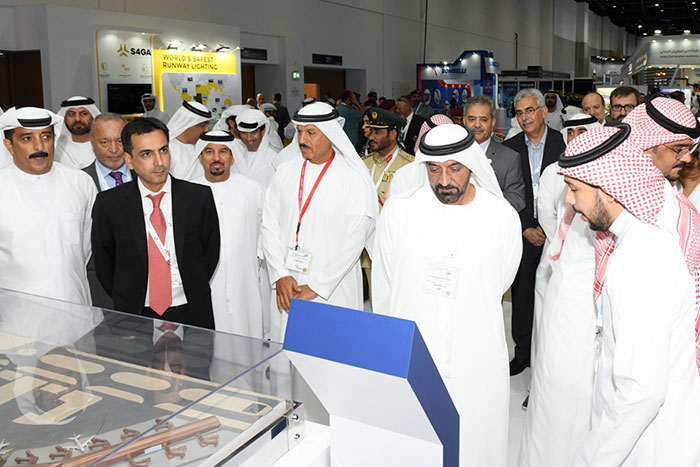 The three-day show started today to a grand opening with an impressive participation of 375 exhibitors from 60 countries.

The exhibitors are showcasing more than 50 new technologies and innovative products over three days at the Dubai International Convention and Exhibition Centre (DICEC).
The show has consolidated its market standing with participating companies set to sign multi-million dirham deals across almost the entire spectrum of airport operations and management.

The show, held under the patronage of His Highness Sheikh Ahmed bin Saeed Al Maktoum, President of Dubai Civil Aviation Authority, Chairman of Dubai Airports and Chairman and Chief Executive of Emirates Airline and Group, is organised by Reed Exhibitions Middle East.

His Highness Sheikh Ahmed has earlier remarked: “With passenger numbers expected to continue their growth trajectory and drive airport expansion projects to accommodate the demand, the UAE’s aviation sector remains a key driver of our economic growth.

The Airport Show, with all the co-located events, is offering an ideal platform the Middle East, Africa and South Asia’s aviation authorities, companies and individuals to come together and collaborate with international experts and leaders to improve global aviation.

The participating companies include 60 top industry bellwethers. More than 75 per cent of the exhibitors are repeat participants. Over 50 new technologies and innovations are unveiled during the Show which occupies over 15,000 square metres of exhibition space in three DICEC halls.

Daniyal Qureshi, Group Exhibition Director at Reed Exhibitions Middle East, organisers of the Airport Show, said the show has been a clear sell-out, indicating the industry’s continuing vibrancy and investment potential for expanding facilities and new technologies at airports and the aviation industry in general.

Delivering the Airport Keynote address at CAPA Aviation Summit, Paul Griffiths, CEO of Dubai Airports Corporation, said DWC is set to handle 240 million passengers with personalised experience in the future. “The hub model is the right and sustainable model, which is benefiting Dubai,” he said.