The IQC and adjacent Corporate Headquarters (CHQ) are on schedule for completion in 2021 with final move-in by early 2022. Both the IQC and CHQ are being built on property owned by the Braves Development Company. Employees moved into the Business Headquarters (BHQ) location in nearby Pennant Park in March 2019. 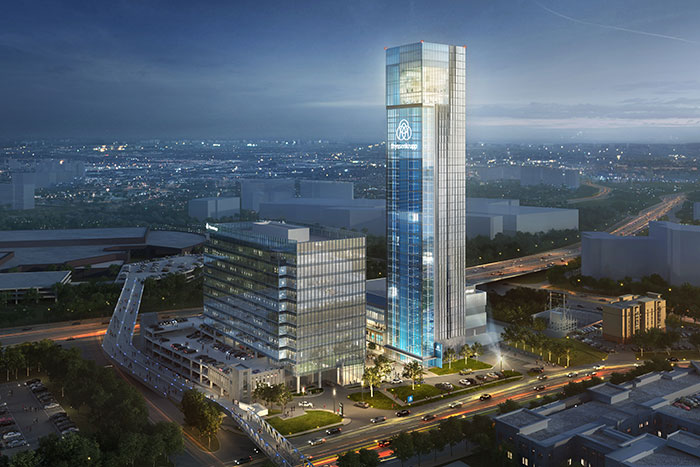 “The completion of the IQC slip-form process is an important moment in our company’s history as it not only symbolizes a brighter future for our organization and the local community, but will be a beacon of engineering excellence that will help transform an industry in need of modern innovations,” said Peter Walker, CEO of Thyssenkrupp Elevator AG.

Slip-form construction involves a moving formwork system being set down on the foundation with concrete being placed on a continuous basis. Often referred to as the core or skeleton of a building, the slip-form construction process is relatively rare in the U.S. but is popular in Europe – this process was used for Thyssenkrupp’s 800-foot-tall elevator test tower in Rottweil, Germany.

“Self-performing concrete work is one of Brasfield & Gorrie’s areas of expertise, and it gives us superior control over the cost, quality, and schedule of a project. We constantly seek opportunities to innovate so we can better serve our clients, and the slip-form process has allowed us to maximize efficiency while building this quality concrete structure,” said Brasfield & Gorrie Vice President and Division Manager Ben Norton.

With 18 shafts, the elevator test tower will be used to trial new concepts and product pilots, including high-speed elevators and TWIN, Thyssenkrupp’s unique elevator system that features two cabins working independently in one shaft. The IQC will also test MULTI, the revolutionary rope-less and sideways-moving elevator system. In addition, the test tower will also conduct robust tests to ensure compliance with stringent safety requirements on standard elevators.

To showcase the elevators at the test tower, the IQC will feature a complete glass exterior façade facing The Battery Atlanta, allowing millions of visitors annually to view operations that are normally hidden behind concrete walls in rural locations. In addition to the elevator test tower, the IQC will also feature event and meeting spaces located at the top of the building – providing breathtaking views of the region – as well as a digital showroom, software lab, engineering offices and training facilities.