Slated for completion soon, the 280m-long Skybridge is an elevated scenic walkway that will link Perth’s Airport to a new train station being constructed, enhancing the efficiency of public transport to and from the airport. Several Iwalks by Thyssenkrupp Elevator will be installed, together with another three elevators that have the capacity to each transport up to 66 passengers. 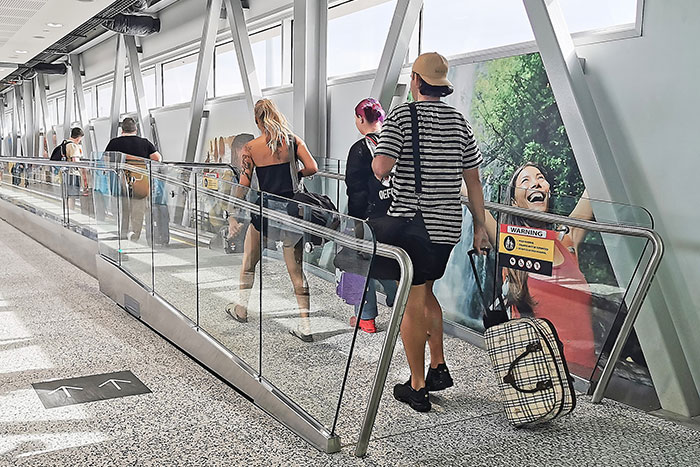 Commencing installation in August 2019, two of the four Iwalks will extend 92m after completion – the longest Iwalks that Thyssenkrupp has ever manufactured. The remaining two are 38m in length. The Iwalks will have the capacity to transport 7,300 passengers per hour, to support the anticipated 20,000 trips a day that the Forrestfield-Airport link is expected to carry when fully running by 2021, according to the Public Transport Authority of Western Australia.

“Thyssenkrupp Elevator was selected as a result of a long and strong relationship between the airport’s builders and the company. Right from the start and due to the Iwalks’ shallow pit for the hovering slimline bridge, we identified the Iwalks as an appropriate solution to providing an aesthetic benefit to the customer”, says Peter Walker, CEO Thyssenkrupp Elevator. He adds: “Innovations move our business forward, especially in the digital era and space. However, our company as well as our customers only gain value from innovations when they help us to be more efficient and provide faster and better services. With Australia’s first Iwalks by Thyssenkrupp, we turn innovations into profitable growth.”

Just in time for the Christmas travel season, Thyssenkrupp technicians put into operation two Iwalks at Melbourne Airport, Terminal 4. Two more are scheduled for installation in March 2020. Here, the biggest structural challenge was to install new moving walks within the existing structure and without creating a new pit. With the support of Thyssenkrupp Elevator Australia, a feasibility study was done by a group of experts including structural engineers and architects. It was confirmed that Thyssenkrupp Iwalks were the most suitable product for this project.

Given the extremely tight timeline, two of the Melbourne Iwalks were flown from Spain into Australia and delivered in less than 20 weeks from the date the order was received.

Thyssenkrupp’s Iwalk, the next-generation moving walk, perfectly fits the airports’ ambitious expansions and upgrades. The spectacular Skybridge at Perth Airport ensures maximum passenger comfort and efficiency when moving from plane to train, or vice versa. Airports are an elementary component of urban mobility – especially when linked to a railway that takes the travellers directly to the city and therewith is an attractive alternative to going by car.

One of Thyssenkrupp’s key objective is to improve every airport’s efficiency and every traveller’s experience. The company is proud to be making airports smarter around the world by:


Iwalks are a cutting-edge solution to the challenge of transporting people, trolleys, and the like. With 30 percent less weight compared to conventional solutions, they revolutionise the way that walks are developed, manufactured and installed. The Iwalk’s modular, compact design is tailored to fit the evolving requirements of space, with reduced weight and outer dimensions to produce thinner floors, requiring less building space, whilst offering enhanced convenience and comfort of passengers due to a wider pallet.