UAE: Energy transition is no longer a choice, but a necessity for a better future

Addressing the ninth session of the Assembly of the International Renewable Energy Agency (IRENA), His Excellency Dr Thani bin Ahmed Al Zeyoudi, Minister of Climate Change and Environment, stressed the importance of expediting the deployment of renewable and clean energy around the world to help achieve sustainable development.

He said: “Energy transition is no longer a choice, but a necessity for a better future for current and upcoming generations. In the last 13 years, the UAE spared no effort to leverage the transition to clean energy at home and abroad, positioning the country as a world leader in the adoption of renewable and clean energy.” 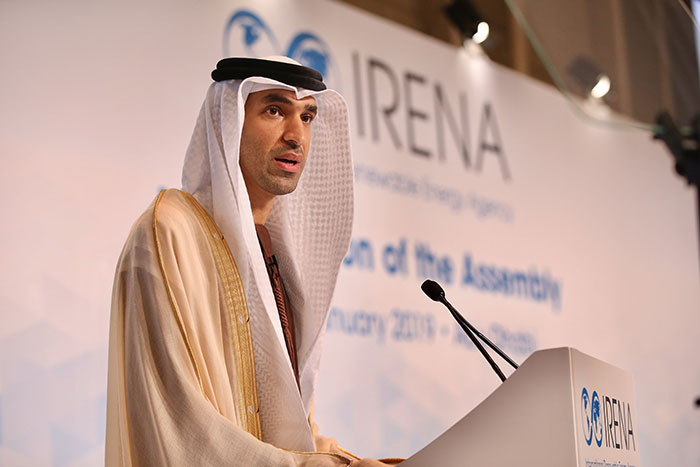 His Excellency Dr Al Zeyoudi added: “The UAE has taken a two-fold approach to drive the transition to clean energy. The first is setting a legislative framework and strategies that guide the transition into a climate-resilient, green economy, while the second is rolling out and financing renewable projects around the world.”

He outlined some of Masdar’s local and international renewable projects in 2018 alone. Locally, Masdar completed the financing of a US$220 million waste-to-energy (WTE) plant in Sharjah, the UAE’s first of its kind, in collaboration with the leading environmental management company, Bee’ah.

As for Masdar’s overseas projects, the Minister said: “Masdar has completed the financing of the US$188 million 200 megawatt-capacity (MW) Baynouna solar energy project, the largest solar power plant in the Hashemite Kingdom of Jordan. Moreover, Masdar helped in building a five-megawatt (MW) solar photovoltaic power plant with battery storage in the Republic of Seychelles. In addition, Masdar has successfully reached multiple key milestones of the collaboration to develop the largest utility-scale commercial wind project in Serbia. The 158-megawatt (MW) wind farm is expected to start production in the first quarter of this year.”

Furthermore, His Excellency Dr Al Zeyoudi spoke about the mega solar projects in the UAE that help the country in its transition to a low-carbon future. A prime example is Noor Abu Dhabi, the world’s largest independent solar power plant. The plant is expected to be officially inaugurated in the first quarter of 2019 and to generate 1,177 megawatts of energy, using photovoltaic technologies.

He also said: “The 5 gigawatt Mohammed bin Rashid Solar Park is advancing faster than planned. During 2018, Phase 3’s 200 megawatt PV was connected to the grid, and the total capacity of the Solar Park reached 413 megawatts. In November 2018, Dubai announced the addition of 250 MW capacity to its 4th phase, at a cost of 2.4 US cents per kilowatt hour.”

Speaking of IRENA’s role, he said: “Over the past eight years, IRENA has grown rapidly from a humble secretariat to a leading international organization with near-universal membership, high-profile projects and global presence. Renewable energy today is a major player in the global energy market, and IRENA’s work is crucial to empowering the decisions of governments and actors. This prompts us to stress the need to accelerate our effort through IRENA, to help build our knowledge and capacity, and strengthen public-private partnerships, facilitate financing, and attain economic, social and environmental benefits.”

The ninth session of the IRENA Assembly is the last to be held under the leadership of Adnan Amin, the Director General of IRENA. On this occasion, His Excellency Dr Thani Al Zeyoudi expressed his gratitude to Mr Amin for his great leadership and congratulated him on the many achievements he has made.

On the sidelines of the assembly, His Excellency Dr Al Zeyoudi met with his Japanese counterpart, Yoshiaki Harada, Minister of Environment, and George Lakkotrypis, Minister of Energy, Commerce, Industry and Tourism in Cyprus.