The UAE is on a firm footing to achieve the net zero carbon buildings commitment backed by its comprehensive approach to green buildings and sustainable development, said Saeed Al Abbar, Chairman of Emirates Green Building Council (EmiratesGBC), at the Global Alliance for Buildings & Construction panel at the 3rd Arab Ministerial Forum on Housing and Urban Development.

In his keynote address, followed by a panel discussion moderated by him, Saeed Al Abbar said the UAE is among the first national governments that have announced its commitment to the ‘Zero Carbon Buildings for All’ initiative, a multi-partner global initiative led by the World Resources Institute (WRI) and endorsed by the UN Secretary General. 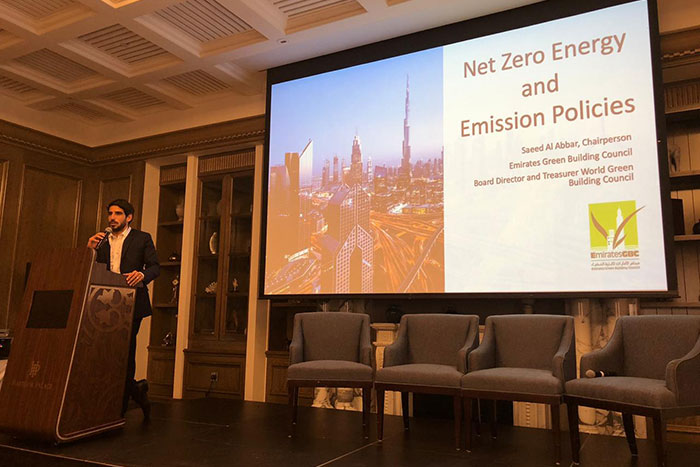 The initiative was announced at the 2019 United Nations Climate Action Summit recently, which had the target of advancing climate action for reducing greenhouse gas emissions to prevent the mean global temperature from rising by more than 1.5 degrees.

“The Net Zero Carbon Buildings Commitment challenges companies, cities, states and regions to reach net zero operating emissions in their portfolio by 2030 and to advocate for all buildings to be net zero in operation by 2050. Here, in the UAE, we have the national level commitment to achieve this goal, with the UAE signing the ‘Zero Carbon Buildings for All Initiative’ in New York last month,” added Al Abbar.

He said it is important to follow the five-step strategy – Commit, Disclose, Act, Verify and Advocate – to achieve the net zero carbon buildings commitment. “Measuring and disclosing annual asset and portfolio emissions, implementing a decarbonisation roadmap towards energy efficiency and renewable energy, verifying the progress towards net zero carbon assets, and acting as a catalyst for further action are the need of the hour, in what is being termed the ‘Climate Decade’. Working together, we can achieve the goal,” he explained.

Al Abbar said there are two pathways to achieve net zero emissions at the national or city level – the policy pathway, which calls for enacting regulations and planning policy at an authority level; and the municipal building pathway, which commits to owning, occupying and developing only assets that are net zero carbon in operation by 2030.

He enumerated the various policy measures adopted by the UAE, including its Clean Energy Strategy 2050, as well as the Green Building Regulations, already enforced in Abu Dhabi, Dubai and Ras Al Khaimah as strong catalysts for net zero carbon buildings. “While there are several existing commitments to which organisations can currently sign-up to demonstrate action against climate change, the Commitment to net zero buildings is unique in positioning building performance as a core component of strategy,” explained Al Abbar. “This ensures full alignment with the ambitions and requirements of the Paris Agreement, which has been ratified by the UAE, who were amongst the first nations to ratify the Agreement.”

He remarked that cities are leading the shift to net zero carbon buildings and will therefore play a major role in achieving the goal of a decarbonised world. To advance the net zero buildings movement, EmiratesGBC, in partnership with the International Living Future Institute, has launched the Zero Energy and Zero Carbon certifications for projects in the UAE. EmiratesGBC has also introduced the ‘Zero Building or Zero Building Design of Year’ category at the MENA Green Building Awards 2019 to be announced on October 16 at a ceremony to be held at Westin Dubai Mina Seyahi Beach Resort & Marina.