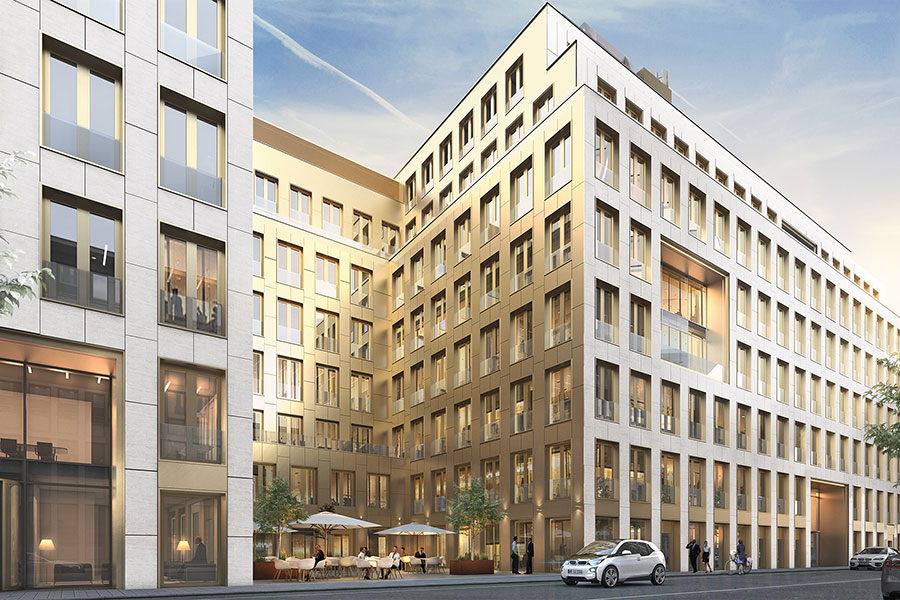 The inaccessible appearance of the original building complex was to be addressed by renovating the Junghof Plaza to allow a flexible yet modern mix of uses.

When existing parts of buildings have to be integrated into new ones, everyone concerned faces a multitude of challenges. In older buildings, listed building status may have to be taken into account or, in inner-city locations, compulsory preservation of existing parts of buildings can result in no space being available for the building site facilities. Structural engineers also have to determine whether structures to be preserved are able to bear the new load or whether they need to be strengthened with additional structural support.

When building the new Junghof Plaza in Goetheviertel, Frankfurt am Main, which will be completed towards the end of 2020 under the leadership of FGI Frankfurter Gewerbimmobilien GmbH, the architects from apd-Ulf Pauli und Partner mbB had to integrate the three existing basement levels as well as the stairwells and two elevator shafts into the design, in keeping with the design development and concept design by Henning Larsen GmbH. Since the new building, which has a total floor area of 33,000 m², has up to 50 percent heavier column loads than the old one, structural engineers at Werner Sobek Frankfurt GmbH & Co. KG had to strengthen the existing foundations. This was made possible through additional pile foundations and using void former modules from Heinze Cobiax Deutschland GmbH in the nine mezzanine floors. This resulted in a weight reduction of 1,425 t, equivalent to around 563 m³ of concrete. This sustainable technology is also helping with the building's silver DGNB certificate by saving 121 t of CO2.

"Following partial demolition of the existing building, redesigning the Junghof Plaza in Frankfurt am Main involved the introduction of contemporary spatial and urban planning features", said Alisa Jarkov, project manager for architecture planning at apd-Ulf Pauli und Partner mbB. "Since the original building complex seemed less accessible from its external appearance, and a flexible yet modern mix of uses was not really possible, the new building was intended to address these shortcomings." This was achieved by opening up the building's interior space, building staggered floors with spacious roof terraces, and creating a partly public space in the courtyard at the Junghof Plaza.

"This interplay is underlined by the two-storey galleries and the open and friendly facade design, lending the new building an attractive look and an individual personality," continues Jarkov. As the three basement floors, staircases and two elevator shafts from the original building were to be retained, the first challenge was to review whether and how the load from the new structures could be built onto existing parts of the building and existing foundations.

The initial situation when construction began envisaged an almost completely new building from the ground floor up, preserving the three basement levels, so that the underground car parks on the 2nd and 3rd basement floors could remain in use throughout all construction work. “The load on the upper floor parts of the new building architecture had to be set on existing parts of the building in the basement. Since the new parts of the building were carrying column loads up to 50 percent heavier, new joist, column and foundation strengthening was required,” explains André Schade, structural engineer at Werner Sobek Frankfurt GmbH & Co. KG.

"Measures taken to meet the design requirements involved, among other things, reducing the dead load of the structure and the resulting relief on the existing heavily-loaded columns." The structural engineer proposed Cobiax void former modules in order to achieve a positive effect on the building's structural load, and these were used on all nine mezzanine floors. Using the Cobiax SL-M-140-160 modules, made from 100 percent recycled plastic, reduced the weight of the intermediate floors by 1,425 t. A total of 61,614 void formers were placed in non-structurally crucial parts of the reinforced concrete slabs, reducing the amount of concrete by 563 m³. This significant weight saving has greatly reduced the number of new pile foundations required. This was a huge advantage, since the additional bored piles had to be drilled in from the first basement level, in order to stay above the groundwater table, which took a lot of effort. "Using our technology means not just a huge improvement in terms of building weight," explains Volkmar Wanninger, managing director of Heinze Cobiax Deutschland GmbH. “Reducing the amount of concrete and thus the amount of cement also produces an ecological benefit which should not be underestimated, as 95 deliveries of concrete were avoided. According to our calculations, the savings in the case of Junghof Plaza came to 121 t of CO2."


Support from design to construction

The savings potential offered by using void formers played an important role even in the design phase. By using Cobiax technology, the reduction in the dead load of the nine upper floor slabs could be calculated before building work began. These values were factored into the structural calculations, so that accurate decisions could be made at the design stage about where and to what extent the existing 1.8 m reinforced concrete floor had to be strengthened using additional pile foundations.

“Cobiax prepared construction designs for the slabs as installation plans for the void formers. The shell design and structural calculations by Werner Sobek, Frankfurt, served as the basis for this. The partnership with Cobiax and all other participants was to our total satisfaction,” said Schade. Using the installation plans, the building company knows where the void formers have to be located in the slabs. "In the course of the first delivery, a Cobiax employee is usually on hand to explain both the handling and installation plans to the construction workers," said Wanninger, explaining the process. "Even if problems arise during the building work, the next delivery is called off or other questions arise, our project management is always available."

Completion of the approx. 35 m tall building, which is to have a silver certificate according to DGNB guidelines, is being planned for the end of 2020. The Junghof Plaza complex will then be handed over for its new role, with mixed use as office space on the eight upper floors, retail and catering businesses on the ground floor, and a boutique hotel with 215 beds at the northern end of the building.