The new capital, one of the world’s largest smart city projects, is being built in three phases 45 kilometers east of Cairo and will expand to cover more than 700 square kilometers once complete. Honeywell will deploy city-wide security and surveillance systems as part of the first phase of development, in collaboration with its partner MTI, to integrate security systems across the capital into a single point of control, known as an Integrated Command and Control Centre (ICCC). 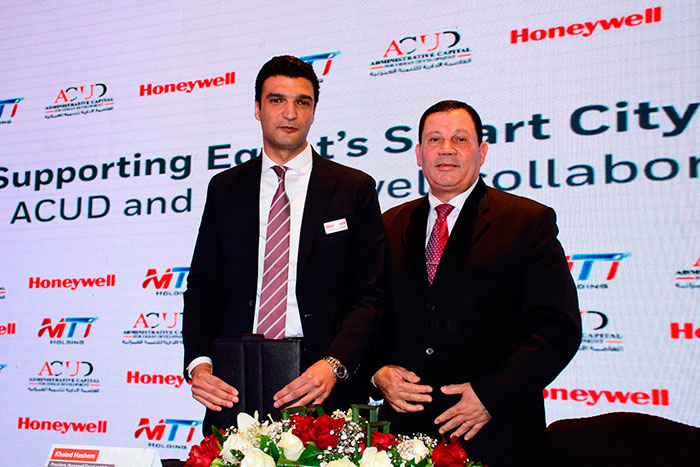 The contract was signed in Cairo by General Eng. Mohamed Abd Allatief, ACUD General Manager and Khaled Hashem, Honeywell president for Egypt and Libya in the presence of Deputy Head of Information Systems Department (ISD), General Hesham Shendy and US Chief of Mission and Chargé d'Affaires, Thomas H Goldberger.

“Honeywell is at the forefront of deploying smart city infrastructure, driving the industry forward with innovative connected technologies that improve the safety, security, and energy efficiency of urban areas around the world,” Hashem said, “We believe that a smart city is a safe city, and are proud to be collaborating with ACUD and MTI on this vital critical infrastructure project, which will ultimately lead to a smarter, safer, and more prosperous Egypt.”

“ACUD is leading Egypt’s most ambitious development project to date, and is firmly committed to leveraging innovation and cutting-edge technology to deliver a smart city based on the principles of safety, security, productivity and sustainability,” General Eng. Ahmed Zaki Abdeen, Chairman, Administrative Capital for Urban Development said: “The new administrative capital will redefine smart living and enable a competitive and diversified economy in line with the national development objectives outlined by Egypt Vision 2030. This significant agreement with Honeywell and MTI takes us one step closer to making this vision a reality.”

The agreement reinforces Honeywell’s commitment to developing smart cities in Egypt, and enabling effective skills and knowledge transfer in line with the goals of Egypt Vision 2030. The company’s diverse hardware and software solutions promote greater safety, security and energy efficiency for cities and buildings, and drive operational efficiencies by leveraging data analytics and cloud technologies.

Operating from Cairo, Honeywell works with some of Egypt’s key government and private sector entities in the fields of smart cities, building automation, oil and gas, refining and petrochemicals, defense, aviation, infrastructure development, logistics, security and fire safety. The company has been present in Egypt for more than 50 years, and is committed to providing the best talent and technologies to support development across Egypt’s major industries.