Have no fear of maths, physics and co.

Freeze your own shadow, puzzle with a snake cube, create giant bubbles with a cable hoist – all this and more can be tried out by visitors to the “Explorhino Science Center” in Aalen. Natural science can be experienced in the new building. The building acoustics in the interior of the complex, which opened in March 2018, were realised with HERADESIGN® wood wool acoustic solutions as a Baffle system from Knauf AMF. 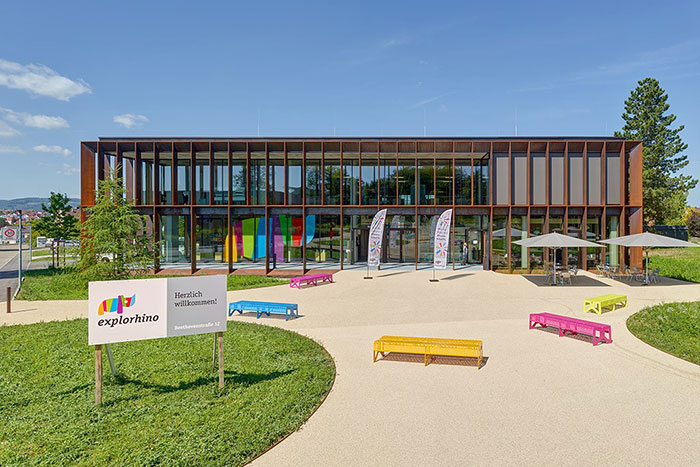 The new construction of the Explorhino Science Center in Aalen brings science to life for children, teenagers and their parents.

The "Explorhino" has been known in the region for about ten years as a student laboratory of the University of Economics and Technology (Aalen). With action days and many other programmes, the initiators want to inspire children and young people in mathematics, information technology, natural science and technology (MINT). This was exactly the target for the new building funded by a private initiative and the city of Aalen.

The Explorhino Science Center is a participatory exhibition, research station and experimental space for hands on experiments. More than 120 natural science exhibits on an area of around 1500 m² on the ground floor invite you to wonder and try it out, while interactive media stations offer the opportunity to gain in-depth information about the phenomena of nature and technology. If required, an “experiment course” with a scientific guide through the Explorhino can be booked. From nursery school to school leavers, children and youngsters together with parents are all welcome at Explorhino. 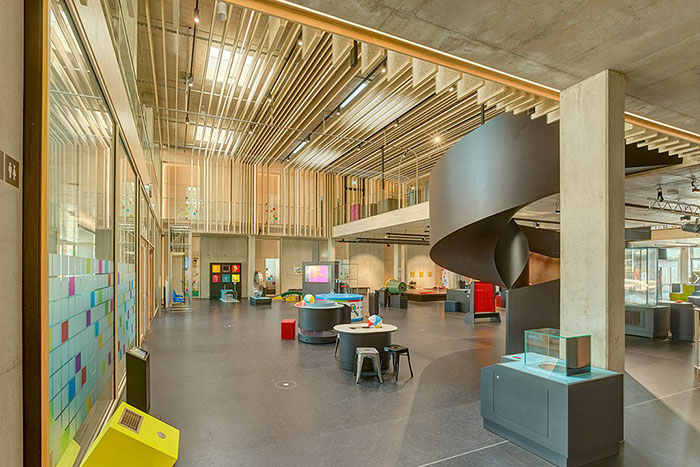 More than 120 natural science exhibits on an area of around 1500 m² on the ground floor invite you to wonder and try it out.

AV1 architects GmbH (Kaiserslautern) and Bachmann architects (Heubach) were responsible for the design of the new building. The acoustic measures and parts of the drywall work (suspended plasterboard ceilings on the upper floor) were carried out by Reisser GmbH (Aalen) between March and September 2017.

The use of baffles to realise the acoustic measures in the Explorhino was based on a proposal from the architects. The clients and investors had to first be convinced. “That’s why we initially installed one of the offices in the upper floor with the help of Knauf AMF as a model” explains Friedrich Reisser. After its completion and a demonstration on site, the decision was made to use the HERADESIGN® baffles. The main reason for this was that the ceiling in the new building of the Explorhino uses concrete core activation, which excludes a closed ceiling construction. 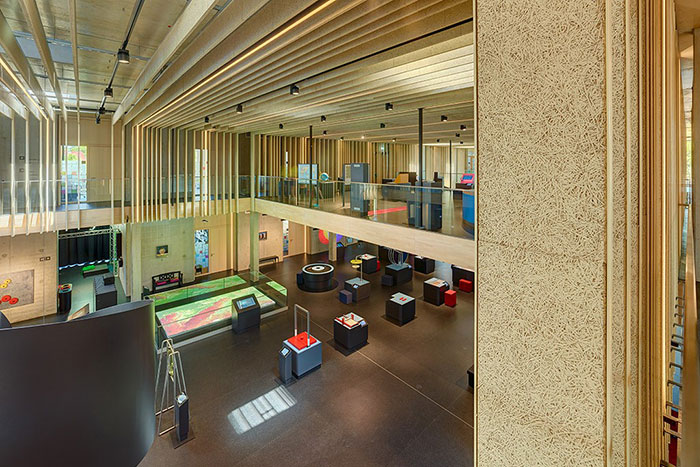 The vertical acoustic elements enclosed in metal frames are fixed to the surrounding glass parapet in the upper floor.

Installation in exhibition and offices

In addition to the technical aspects, design arguments also came into play. Thomas Reisser: "The upper floor has a surrounding parapet made of wood and glass. The baffle variant in natural, which Knauf AMF was able to supply, fits best with this. Other systems or colours were therefore not considered. "

A total of 3010 HERADESIGN® fine baffles in the format 1200 x 300 x 32 mm were installed on the ceiling and 776 vertically on the walls, as a special construction (special format 2100 x 287 x 32 mm). They are magnesite bonded wood wool acoustic tiles with 2 mm fibre width in the colour beige-natural. The baffles are spread over the entire Explorhino exhibition area (walls and ceilings), and additionally on the ceiling of some offices in the upper floor. 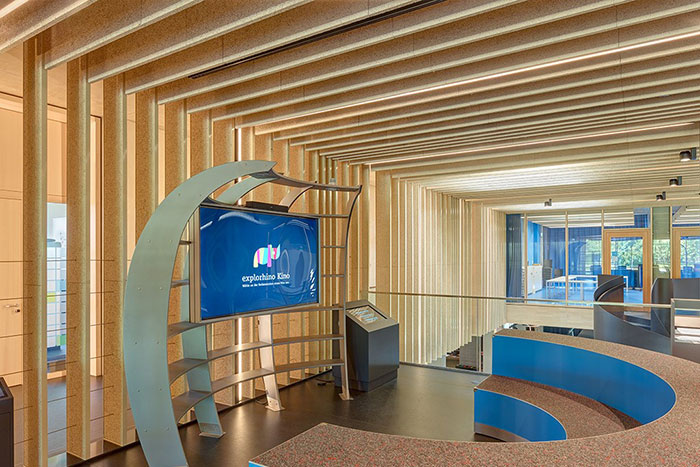 A small cinema is also in the Explorhino, which was included in the acoustic concept.

A metal worker was specifically commissioned to produce steel frames for the vertical baffles. "The tiles were cut to fit exactly by Knauf AMF", explains Ivo Greiner, who managed the project from the Knauf AMF side. “They were bevelled on 3 edges and square cut on 1 edge. The different edges are an outstanding feature of the wood wool acoustic tiles used.” The metal frame serves as stability and also ensures the exact functionality of the baffles as an acoustically effective measure.

The logistics of the acoustic elements were carried out by the Reisser GmbH team themselves. Thomas Reisser: "There would not have been enough space on site, so we first had the material delivered to our company premises. There, the tiles were sorted by us, as it were, according to application areas and delivered in the right order to the project. With our own lorry crane, we then unloaded the tiles and placed the corresponding part directly in the upper floor. " 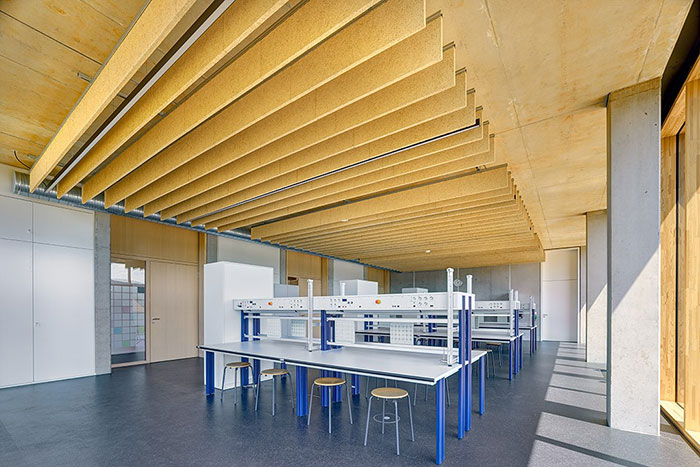 In addition to the large exhibition, the new Science Center includes two visitor labs for guided experimentation in the courses.

On site, the Reisser team then fixed the fixing points in the baffles, screwed and glued the bolts “We also determined and checked the technical values on site to see that the stability was sufficient.” The next step was to construct a scaffold internally and install the grid structure on the ceiling with metal profiles fixed at right-angles to each other, to which the baffles were then fixed. For the acoustic elements on the walls, the cut to size baffles were placed and glued in the frames. Between three and four employees from Reisser GmbH were on site for the installation, supported technically by Knauf AMF sales representative Ivo Greiner.