KONE, a global leader in the elevator and escalator industry, has initiated the very first phases of its elevator installations at the impressive Kingdom Tower construction site in Jeddah, Saudi Arabia. The Kingdom Tower project, which is owned and developed by Jeddah Economic Company (JEC), will be the world’s tallest building once completed in 2018 and is expected to rise to a height of more than one kilometer.

KONE Areeco, KONE’s Saudi Arabian joint venture, has been involved in the planning and design of all vertical transportation systems for the Kingdom Tower over the past two years in conjunction with KONE’s global experts. The project team arrived on site last January and is currently working on pre-installation activities concerning the fitting of the elevator system’s guiderails, which is expected to begin towards the end of this year. The installation of the guiderails, as well as the eventual installation of the KONE elevator cars, will then progress as the Kingdom Tower’s central structure rises over the coming years. 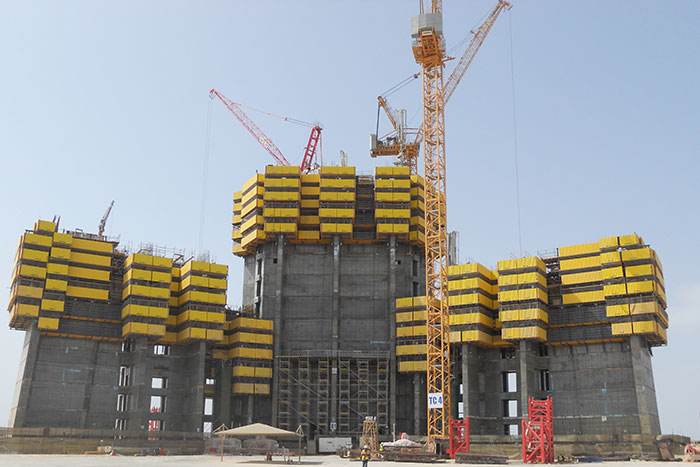 KONE’s engineering and project management teams are meticulously preparing for the next phases of the project which will cover the manufacturing and delivery of KONE’s vertical transportation solutions. For a building with such unprecedented height, KONE will deliver uniquely advanced technology: the world’s fastest and highest DoubleDeck elevators, supported by the revolutionary KONE UltraRope® technology, as well as the latest People Flow Intelligence solutions.

“I am delighted we are now at the stage of taking the next leap with KONE in the construction of the Kingdom Tower,” said Mr. Mounib Hammoud, CEO of Jeddah Economic Company, owner and developer of the Kingdom Tower and Kingdom City, which is chaired by HRH Prince Al Waleed Bin Talal Al Saud, Chairman of Kingdom Holding Company. “Building the tallest tower in the world is about human ingenuity and the strength of the materials used. Based on this premise, KONE is the only vertical transportation service provider in the world capable of delivering what we need at the Kingdom Tower – specifically the capability of travelling at a speed of over 10 meters per second with DoubleDeck elevators to reach the highest liveable floor in the world in 52 seconds. In addition, the high-speed elevators will rise 660 meters to the observation deck, making it the world’s highest elevator rise.”

“Furthermore, with the use of KONE UltraRope, which is one-third of the weight of traditional ropes, we will be able to fit the DoubleDeck elevators with normal machines, a huge advantage that will enhance the sustainability of the Kingdom Tower by consuming much less power,” adds Hammoud.

“We are immensely proud to be associated with KONE in a relationship that will add two new world firsts to the many other industry records we are setting in building this mega landmark that will be the pride of the Kingdom of Saudi Arabia.”

“We are absolutely thrilled at having our operations up and running at the Kingdom Tower construction site and to start our installation activities alongside the construction of the tower’s core structure,” says Sascha Brozek, Senior Vice President, Major Projects, KONE. “Without a doubt, the Kingdom Tower project will push the industry’s limits to new heights and we are very proud to be an integral part of that journey. We also look forward to continuing our close collaboration with JEC, the Saudi Binladin Group and all the other parties involved in the construction of this epic landmark.”