Liberty Global is an international telecommunication and television company, and also one of the largest internet service providers outside of the United States. Liberty Global operates in 14 countries and has over 35,000 employees. Consumer brands under the Liberty Global umbrella include VodafoneZiggo, Virgin Media, UPC, Unitymedia and Telenet. 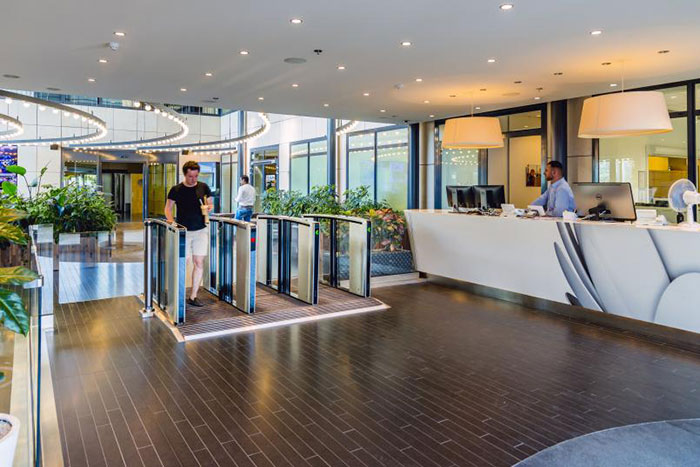 Liberty Global operates seven office buildings in Schiphol-Rijk, The Netherlands. This location employs around 1,600 people and has a strong emphasis on security as a top priority. Deploying a combination of technology, private security staff and a general security awareness program, Liberty Global was still in the market for additional, higher security measures.

“We did have security at the main entrance, but it could not always prevent people from entering our central hall unnoticed,” said Simon Kuitert, Corporate Security Manager at Liberty Global. “Moreover, there were several entrances where visitors could enter along with employees, without being seen. Often, they were not yet in restricted or private spaces, but we would want to know who comes in our building. That is why we introduced ‘single point of entry’ during a recent renovation.”

Mitigating Tailgating Through a “Single Point of Entry” Strategy

Liberty Global deployed this “single point of entry” strategy at each of the seven buildings in Schiphol-Rijk. This means that employees and other guests are required to enter each building through one entry location, rather than multiple locations around the building perimeter.

The company chose Boon Edam’s Lifeline Speedlane Swing optical turnstiles at its main building. This building has a receptionist present during office hours to welcome employees, visitors and vendors. The optical turnstiles combine security with aesthetics, and provide a high throughput. Due to an existing underfloor heating system that prevented drilling into the floor, the turnstiles were placed on a sleek platform for a seamless look. An access gate was also added for those in wheelchairs or with dollies and large packages.

Higher security measures were implemented at the company’s other six buildings. Boon Edam’s Tourlock 180+90 security revolving doors ensure that only one authorized employee can enter the building at a time. If an unauthorized person attempts to follow an employee in the trailing compartment of the door, the door senses their presence and stops rotation of the door in a position that rebuffs the tailgating attempt yet allows the authorized person to continue. 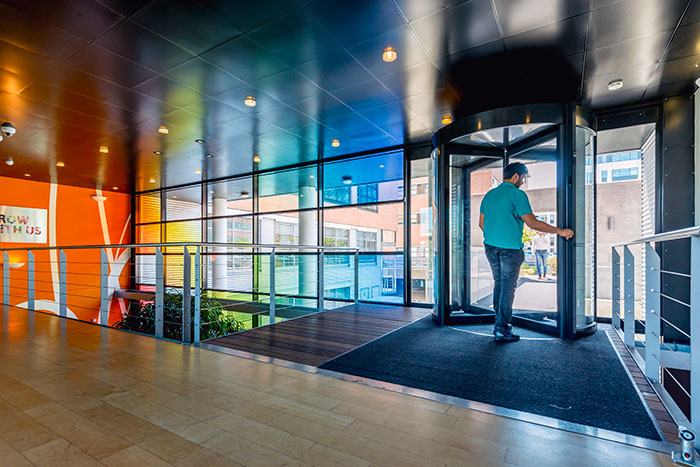 Working with a Quality Company

Liberty Global chose to work with Boon Edam for their quality entrances. “They are not the least expensive, but the products are innovative, durable and aesthetically-pleasing,” stated Kuitert. “Before selecting Boon Edam, we chose another manufacturer for entrances because they were cheaper. That immediately became the bad buy of the year - it was one issue after another. Since we’ve implemented Boon Edam, we have experienced quality from the sales process through to service. They will not leave you out in the cold and I love that.”