When the new cooling tower basin at the Praxair industrial gas production facility in Louisiana started to leak water through hairline shrinkage cracks during tests, PENETRON ADMIX – with its crystalline technology – turned out to be the optimal solution to an inherent issue with new concrete. The new, and now watertight, facility opened on schedule in September 2018. 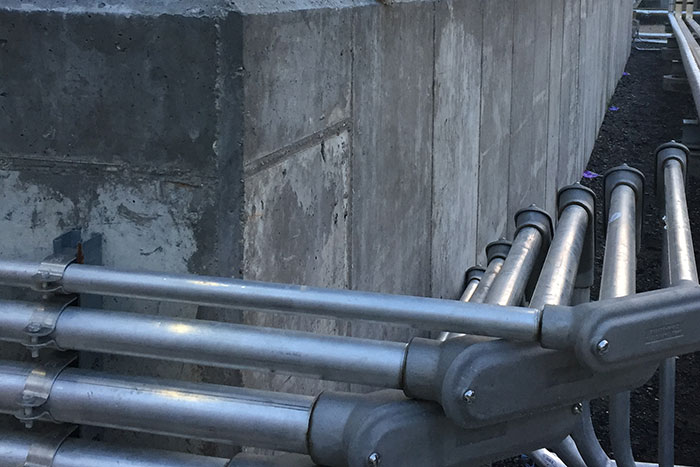 Representing the final stage of carbon monoxide production, the new #6 cooling tower at the Praxair plant in Geismar (Louisiana) expels excess heat as water vapor into the air. The US$ 100 million project by Praxair, a leading global industrial gas company, will help to expand the plant’s carbon monoxide production output to better meet increasing demand from the Mississippi River corridor of the USA, which includes over a dozen customers ranging from world-scale refineries to biofuel companies.

Carbon monoxide is a raw material used to manufacture a range of specialty chemicals, including those used to produce polyurethanes for the housing and auto industries. Packaged carbon monoxide is also used for a wide range of further applications:

Concrete Can Be Complex
Once completed, the Geismar project adds a new carbon monoxide cold box and cooling tower that help proprietary Praxair technologies carry out a process to purify 13 million standard cubic feet of carbon monoxide per day.

While concrete is a hard and solid matrix, it is also porous and subject to cracking, in particular, during the initial pour under certain conditions. This allows water and chemicals to seep in through pores, micro-cracks and capillary tracts, resulting in possible leaks and a wide range of problems that can damage the concrete structure.

Confronting Leakage During Water Tests
“During tests done at the outset of the Praxair project, water started leaking through a number of hairline shrinkage cracks,” notes Christopher Chen, Director of The Penetron Group. “However, because PENETRON ADMIX had been added to the concrete during batching, over 90% of the hairline cracks were sealed after a week into the tests.”

PENETRON ADMIX SB (in soluble bags) was added to the concrete for the Praxair facility at the Sorrento Lumber concrete batching plant just a few miles from the project construction site. As a crystalline admixture, PENETRON ADMIX reacts in a catalytic reaction with moisture in fresh concrete to generate a non-soluble crystalline formation throughout the pores and capillary tracts normally found in concrete. This formation permanently seals micro-cracks, pores and capillaries against the penetration of water or liquids from any direction, substantially reducing the permeability of usually porous concrete.

Self-healing a Crucial Performance Advantage
“Because concrete is subject to a range of different conditions over its lifetime, providing enhanced durability is extremely important,” adds Christopher Chen. “This gives the self-healing capability of our admixture – illustrated by the Praxiar project – a distinct performance advantage.”

For added protection, an additional coating of PENETRON topical material was applied as a slurry to the surface of the basin to coat and seal any additional cracking that became evident in the new concrete.

“Originally, a competitive waterproofing product was specified for the Praxair project,” says Christopher Chen. “Fortunately, the decision to go with the superior product performance of PENETRON ADMIX guaranteed a positive outcome at the Geismar facility.”

The Penetron Group is a leading manufacturer of specialty construction products for concrete waterproofing, concrete repairs and floor preparation systems. The Group operates through a global network, offering support to the design and construction community through its regional offices, representatives and distribution channels.