A luxury class hotel opened in the Croatian port of Rovinj in early April 2019. The Grand Park Hotel – designed by the Italian architect Piero Lissoni and the Croatian 3LHD Studio – offers discerning guests every conceivable comfort. This also includes excellent room acoustics, especially in the public areas of the highend hotel.

The location couldn‘t be better: Nestled in a pine forest, at the southern end of the beach promenade, the Grand Park Hotel Rovinj has positioned itself – with a view of the old town, the marina, the sea and just a few minutes’ walk from the city centre. Due to the cascade-like construction and the green roofs, the elongated building blends in harmoniously with its surroundings. 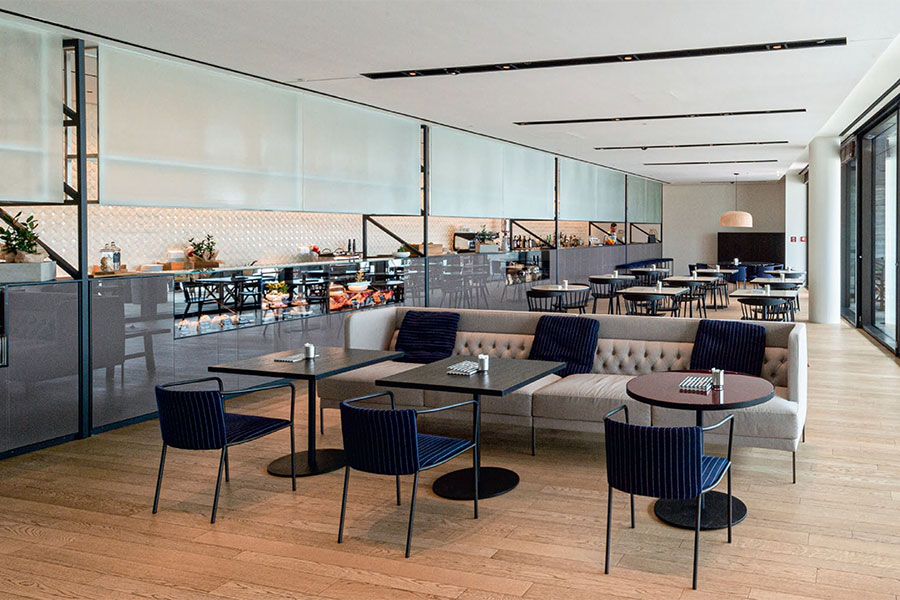 The Grand Park Hotel is part of the Maistra Collection, under which the Maistra Hospitality Group combines its premium and luxury hotels. After several years of planning and around two years of construction, the six-story hotel construction was completed at the end of March 2019. In addition to 209 elegant rooms and suites, the hotel offers its guests several restaurants and bars, its own shopping arcade, conference rooms and a 3800 square metre wellness and spa area as well as various sports facilities.

High-end design by Lissoni from Milan

The interior of the hotel bears the signature of the renowned Milanese studio Lissoni Associati. Inspired by the Mediterranean, mostly natural materials such as stone and wood were used in the design.

Dark colours predominate in the hallways, lighter ones in the rooms. Grey, beige and earth tones bring visual calm into the rooms. But it‘s not just the optic that shapes the relaxed ambience. Acoustic quality is equally important. For this project, Knauf AMF supplied more than 2000 square metres of acoustically effective ceiling solutions, which ensure peace and comfort in various areas of the hotel.

With the innovative AMF TACET® system, it is possible to design homogeneous suspended ceilings without joints, which also reduce noise. At the end of 2018, 350 m² of this system were installed in the hotel bar, including the café, and at the pool bar in the spa area.

The quality and characteristics of the system exactly met the architect‘s ideas of installing a smooth, optically flawless ceiling with good sound absorption values – at least class B – in the hotel. The LED ceiling lighting from the Italian manufacturer iGuzzini sets characteristic accents in the jointless acoustic ceiling. The dark, recessed light strips illuminate the rooms evenly and also form a rhythmic subdivision of the otherwise seamless surface.

Black acoustic ceilings for the corridors

THERMATEX® Alpha Black ceiling tiles, coated with a black fleece, were used in the corridors of the staff wing (a total of 2000 m²). Due to their special appearance and sound-absorbing quality, they are also used for cinemas. The objective for this area of the hotel was to obtain a completely black ceiling with high sound absorption values (class A) as a contrast to the light walls.

Another advantage for the construction process: thanks to the efficient modular ceiling solution, not only is installation quick, but individual elements can also be easily demounted for maintenance work. It is always possible to easily access the ceiling void for inspection.