HIMOINSA recently attended the International Rental Exhibition (IRE), one of the Europe’s leading forums for rental companies, which was held in Amsterdam from 24 to 26 June. With 90 companies exhibiting and hundreds of visitors, the RAI Amsterdam Exhibition and Convention Centre played host to the latest developments in the rental sector. HIMOINSA presented its new range of Apolo lighting towers and exhibited its competitive generator sets with stage III A engines, which are fully compliant with European emissions regulations. 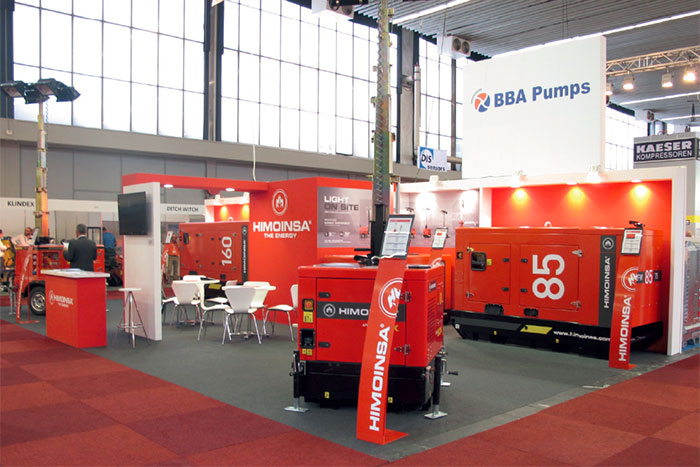 With large rental companies needing to update their equipment and small ones starting to expand their fleets, demand for generator sets is continuously growing in European countries. Powered by Stage IIIA Yanmar, FPT, MTU and Scania engines, HIMOINSA generator sets are powerful, robust, mobile and cost-effective. Speaking in Amsterdam, Manuel Sánchez Bada, HIMOINSA Engineering Manager, said the company’s generator sets “come with a wide range of double-walled, waterproof fuel tanks, with different base panel arrangements”, as well as guaranteeing excellent operation in parallel and other options upon request.

Leading HIMOINSA distribution companies in Europe attended the event to find out more about the energy multinational’s latest engineering advances. The HIMOINSA distributor in Belgium, Vandaele, expressed its pleasure with the HIMOINSA mobile units – generator sets and lighting towers that serve the needs of the construction and rental markets and are easy to move and transport.

Francisco Inglés, the HIMOINSA Regional Manager in Europe, met with various rental companies during the course of the exhibition, and said the new APOLO lighting towers had received a positive response, being regarded by the market as “a compact and easily transportable product with great lighting capacity”.

The latest figures from the rental market put the United Kingdom at the head of the list of European countries in terms of strongest growth outlook in the rental sector. Germany, Scandinavia, Belgium and Holland come next on the league table. These are all countries where HIMOINSA has a consolidated distribution network able to meet market needs and offer a quick and efficient after-sales and spare parts service.

HIMOINSA generator sets and lighting towers are today found in the equipment fleets of major rental companies such as Loxam, Ramirent, Red-D-Arc, Speedy, Woodlands Generators, Charles Wilson Engineers... Leading Polish machinery rental firm ATUT RENTAL also visited the HIMOINSA stand with Marcin Miziak, General Manager of HIMOINSA Poland. The rental sector is currently one of HIMOINSA’s biggest markets in Poland, accounting for over 40% of the company’s sales in the country. “The construction sector is growing. The figures were not particularly high at the start of the year, but right now the situation could be described as very good”, said Marcin Miziak.

Boeckelmann, one of the distributors of HIMONSA Deutschland, visited the HIMOINSA stand to find out more about the features of the new equipment for the rental sector. With a commercial relationship going back more than 10 years, Boeckelmann distributes HIMOINSA products in Germany, where the energy multinational also sells its generator sets and lighting towers to leading rental companies such as Mobil-Strom, Elbe and Esk.

Reinhold Heim, Managing Director of HIMOINSA Deutschland, is confident that the new range of Apolo lighting towers will be well received in Germany, which has been ranked near the top of the league table of countries following recent surveys. “HIMOINSA is now starting to gain a greater market share. The number of lighting towers being sold in Germany is growing fast, and HIMOINSA is ready to meet this demand, offering a high-quality product and good service”, said Reinhold Heim, adding: “This is just the right time for HIMOINSA to be taking part in events such as these focusing on the rental sector, because we have a very well-developed product able to meet all market expectations”.

Generator sets and lighting towers for the rental sector

HIMOINSA manufactures generator sets for the rental sector with Stage IIIA engines, with a power range of between 30 and 665 kVA. It also offers more powerful generators with special arrangements and connections in parallel, offering the option to increase and/ or decrease power to suit the client’s requirements at any given time. One of the company’s priorities has always been to make equipment that is easily stackable and transportable, enabling rental companies to access them quickly for delivery to their customers. The bodywork of the HR generator sets incorporates a slide carriage, which makes them easier to transport while also protecting the bodywork from potential damage through direct contact with hard and unstable surfaces, which are typical in the construction industry – one of the main target sectors for rental companies. Visitors to IRE were able to learn all about these features by examining the HRYW 35 generator, with a Yanmar Stage IIIA engine, and the HRFW 85 and HRFW 160 generators with Iveco-FPT Stage IIIA engines, all of which were on show at the HIMOINSA stand.

HIMOINSA has designed a full range of tough and versatile lighting towers with a high degree of autonomy. With an illumination capacity of up to 1,320,000 lumens, some of the towers in the APOLO range can light 110,000 square metres and operate for 166 hours non-stop – a total of 17 nights without recharging. These carefully-designed towers include LED versions, which guarantee energy savings. Their small size makes them cheaper to transport, cutting costs. The APOLO range has also been designed to function in extreme conditions, and can withstand temperatures between -20° and 45° C.