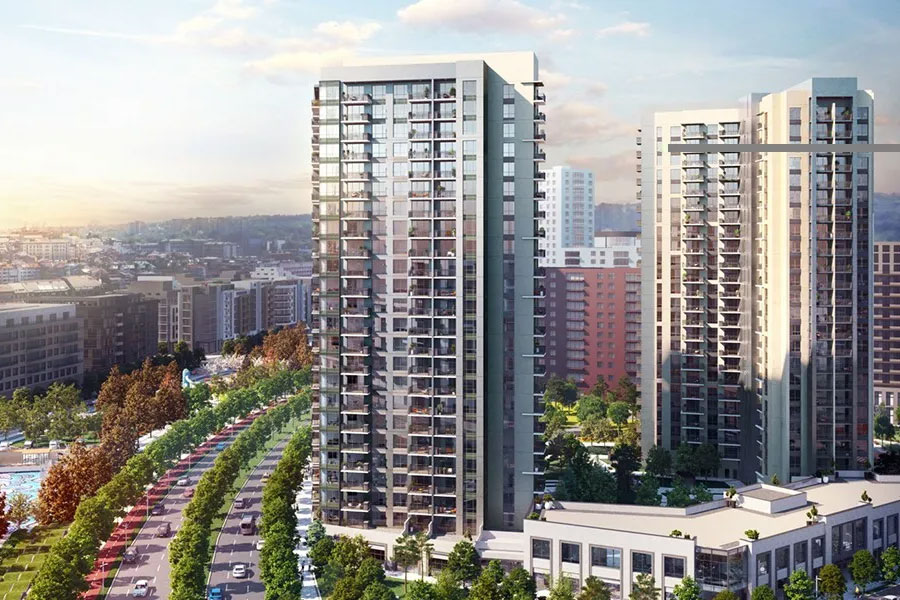 The completion of Plot 21a, the latest phase of the monumental Belgrade Waterfront development, in December 2021 marks the latest step in a profound transformation of the Sava River waterfront area of Belgrade, Serbia. PENETRON ADMIX, a crystalline concrete waterproofing solution, was specified over a conventional membrane system to counter the high water table from the Sava River, only 100 m from the construction site.

As the capital city and largest commercial center of Serbia, Belgrade lies at the confluence of the Danube and Sava Rivers and is home to 1.2 million inhabitants. The city is a key industrial center for Serbia and Southern Europe, with many international railroad lines passing though Belgrade, which is also served by highways and by river vessels traveling up the Danube from the Black Sea or arriving from western Europe via the Main-Danube Canal.

The US$3 billion Belgrade Waterfront development is situated between Belgrade’s historic old town (“Stari Grad”) and the new district of Novi Beograd, an enormous urban complex rising on the right bank of the Sava River. Once completed, the 1.8 million m2 of gross construction area will comprise 250,000 m2 of office space, 7,000 apartment units, and eight hotels.

“The Belgrade Waterfront project will also be integrated into the adjacent Sava Park, an extensive green space with sports and recreational facilities, including a multifunctional playing court, outdoor table tennis tables, a 700 m jogging track, a picnic area, a children’s playground, and a communal garden,” adds Theodor Mentzikofakis, Managing Director of Penetron Hellas.

The newly completed Plot 21a phase comprises the “BW Arcadia” and the “BW Aurora” residential towers that feature an in-house kindergarten, verdant atrium gardens, and a ground floor retail area of shops, a supermarket, and restaurants. Located directly opposite Sava Park, the two 23-floor buildings house 488 apartment units, available as 1- to 4-bedroom layouts and penthouses.

The construction site location facing the Sava River made the groundwater situation a concern for the general contractor. Initially, a traditional waterproofing membrane system was considered, but with numerous below-grade concrete structures of the Plot 21a project exposed to the hydrostatic pressure due to the groundwater, a more reliable and practical solution was needed. During the planning phase of the project, the Penetron Hellas team presented a comprehensive concrete waterproofing solution to Mašinoprojekt KOPRING, a high-rise engineering company, and Strabag, the general contractor.

“By offering an integral waterproofing solution that requires no conventional or secondary waterproofing systems, we were able to show how PENETRON ADMIX was a more durable, maintenance-free solution. It would substantially extend the lifetime of the Plot 21a concrete structures, but also help keep this phase of the project on schedule, thanks to its ease of application,” explains Theodor Mentzikofakis. “As a result, Strabag recommended the use of PENETRON ADMIX.”

Beton Plus, the ready-mix concrete supplier, mixed PENETRON ADMIX into 25,000 m3 (32,700 yds3) of concrete for the structures of two basement floors to counter the high hydrostatic pressure from groundwater levels exacerbated by the nearby Sava River. Approximately 8,000 m (5 miles) of PENEBAR waterstop strips were used to seal the construction joints.

Easily mixed in during batching, the active compounds in PENETRON ADMIX penetrate deeply into the concrete structure, filling micro-cracks, pores, and capillaries with an insoluble crystalline formation. This prevents water and water-borne chemicals from entering the concrete structures, even under the high hydrostatic pressure generated by the Sava River. In addition, any cracks that may develop during the lifetime of the concrete automatically self-heal, resulting in waterproof and durable concrete for the lifespan of the structure. No further maintenance or treatment is required.

“Work on the next stage of the Belgrade Waterfront development is already in full swing,” adds Theodor Mentzikofakis. “The Penetron System is being added to the new building foundations as we speak.”