The 2012 Olympics saw tens of thousands of athletes and spectators descend on London. Health and safety concerns during that time were top priorities.

In preparation for the Summer Games of 2012, British health officials evaluated public health concerns and took every precaution to prevent the growth and spread of the dangerous Legionnaire’s Disease. Airports, hotels, hospitals, arenas and other large buildings were of special concern.

The best way for these facilities to proactively reduce the risk of legionella exposure to their guest was to install proper cooling tower filtration. Heathrow Airport in London did exactly that, installing a LAKOS Filtration system several years ago. 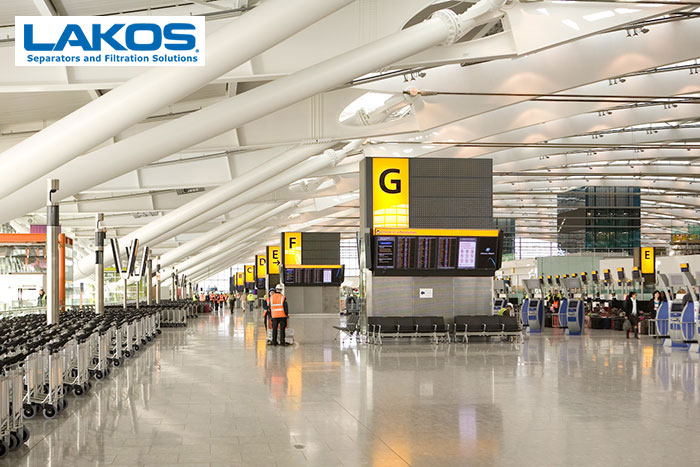 On a normal day at Heathrow, over 190,000 passengers either arrive or depart out of UK’s busiest airport. Around 80 per cent of all Games visitors were expected to pass through Heathrow – including athletes, officials, the media, as well as spectators.

For the Olympics, Heathrow recruited 1,000 additional volunteers to assist with the increased traffic, and upgraded the baggage system to handle over 200,000 pieces of luggage, including everything from canoes to pole vaults.

Together with the LAKOS Filtration system and other facility improvements, airport officials confidently and successfully met the demands both during and after the Games.

A LAKOS Filtration System for cooling towers is an excellent solution to keep the cooling tower basin clean and prevent the environment in which Legionella can flourish.

Prevention is the key, as described by ASHAE in these words: “Keeping the system clean reduces nutrients available for Legionella growth... centrifugal gravity type separators... can be used to assist the removal of debris.”

One way in which a LAKOS Filtration system accomplishes this is through the placement of high pressure nozzles at strategic locations in the cooling town basin, where they prevent dirt, grit, and other solids from settling in one location.

These "HydroBooster" nozzles play a key role in the cleaning process, and utilize a patented vortex technology to push basin solids towards the separator so it can be separated from the water and removed from the system.